When, in April 2011, I went back to Loch Awe for one final cast, little did I know how my life was going to change. Eighteen years of Kent birding under my belt bought to a shuddering halt due to the capture of some very modest pike from the magnificent, peat stained waters of Kilchurn Bay. Benno and Bev have to accept equal blame/credit for this monumental U-turn in my leisure time pursuit as "speccy hunting", once again, came to dominate my free time.

As I said, the pike falling to my rods were quite modest, but Benno was to land the first Scottish "twenty" I'd ever seen and that was the spark which ignited the flame once more. That first season back was to see me acquaint myself with ridiculous ease of modern commercial carp fisheries and also discover that perch were, once again, widespread, healthy and attaining weights which beggared belief. Off we went to Stream Valley and what'd you know, I land a new PB (2 lbs 10 oz) on our first outing and was to witness several specimens topping my own to a maximum of 3 lbs 6 oz. 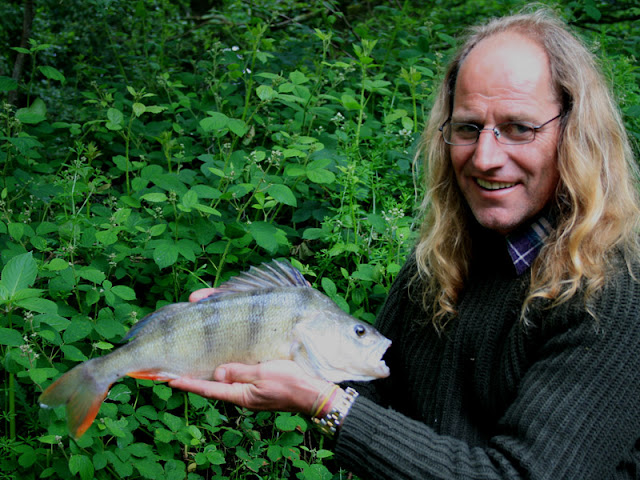 I spent the majority of the 2011 summer, re-acquainting myself with the thrill of centre-pins and surface caught carp. The local area is certainly well catered for in this respect, however, it was pike which had fanned the flames and what I had set my heart on. I wanted another twenty but, this time, on my terms. I no longer wished to be part of the circuit water scene and chasing yesterdays news. No, I wanted a wild fish from an unfashionable venue and the East Kent marshes were to provide my first test.  I was very fortunate to gain access to a remote drain and had an absolute blast over that winter period. I landed numerous pike to a top weight of 19 lbs 2 oz, so I failed in my quest but learned so much more which was to stand me in good stead as I moved forward. 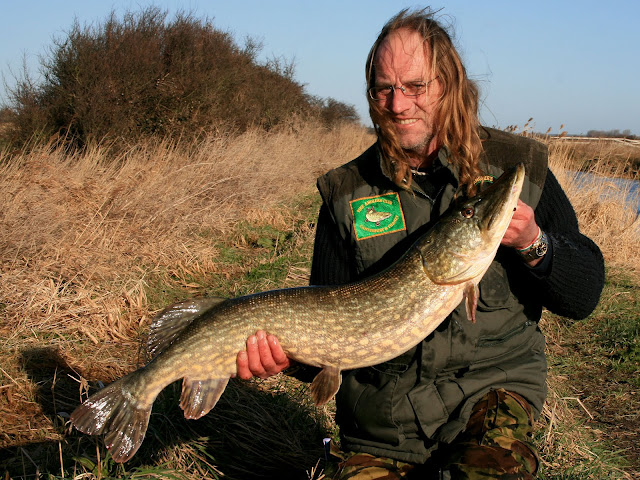 2012 was to see me embark on a journey of re-discovery as the Kentish Stour became a fishery which came onto the radar. Benno had already taken a 6 lbs+ Chub from a tiny free section just outside Sturry. I popped along to have a look at what all the fuss was about and became fascinated by the barbel which were reported to be present, yet capturing my PB chub (5 lbs 2 oz) for my troubles. The internet was to fan the flames, even higher, with stories of monster barbel being captured from the river, particularly by one "social scrounging, work shy, Drennan Cup Winner" 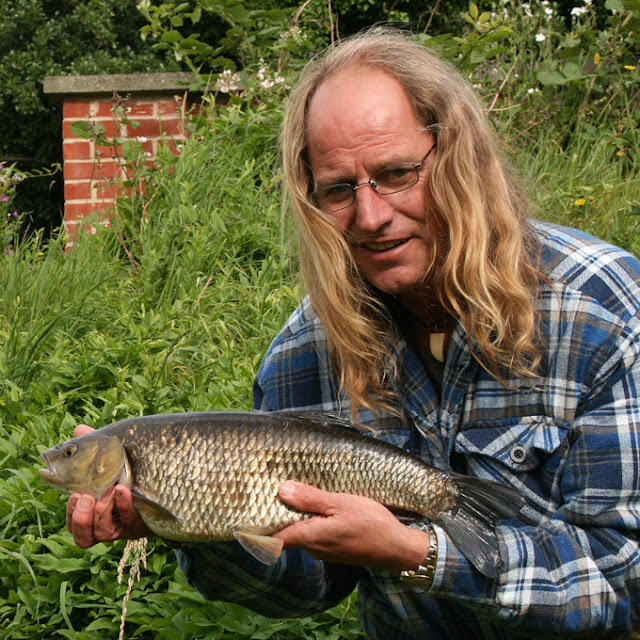 However, I had that twenty pound pike target to address and had changed my focus to the Royal Military Canal for the winter 2012/13. It was just days after the passing of my Mum when I was to realise my dream. All alone, on a desolate stretch of the canal, moments don't get much more intense. It was far more than another wet fish in the bottom of that landing net?

As the new river season started, in June, Benno and I headed off to the mighty River Severn to spend a couple of days barbel fishing at Hampton Lode. Great fun, we returned home even more determined to take a decent barbel from the Kentish Stour because of our experiences. Indeed; I'd landed my first two barbel since 1985!  Back down on the Stour it was Benno who got things started with a magnificent specimen of 11 lbs 6 oz. This was the biggest barbel I'd ever seen to that time - absolutely awesome! 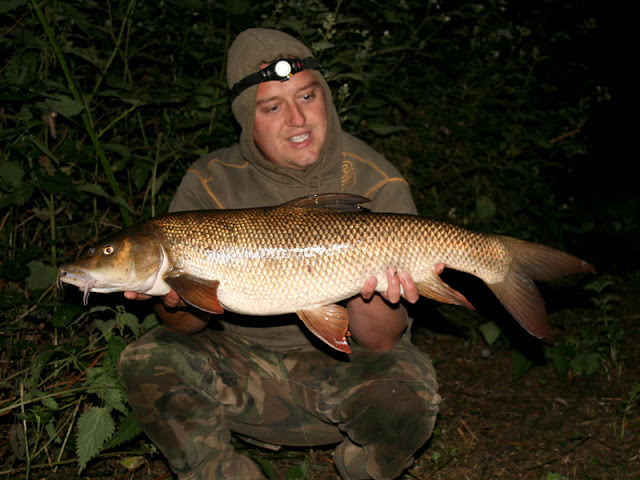 My time would come, but I was made to work for it, such are the nuances of this splendid little river. I caught my first ever "double" in the July, yet is was five crazy days during August which will remain ever etched in my memory. I took two thirteen pounders (13 lbs 5 oz & 13 lbs 14 oz) from a swim which I'd had to cut out for myself - it doesn't get much more rewarding? If Mum was smiling down when that pike was landed, then Fred Crouch would have been equally pleased by those fish?


I did get back to the river for the early part of the 2014 season, landing a couple of doubles for the efforts involved. It was a very testing time and not particularly enjoyable. I was there in spite, not because, if that makes any sense? Time to look elsewhere for my challenges. The local commercials came to the rescue, particularly the Sandwich Coarse Fishery. Using very ancient kit, I was able to glean some superb learning, amidst the very real enjoyment, as centre-pins and particle baits were my chosen approach. There are several points about carp angling and the "instant angler" which I'm struggling to comprehend, but feel sure it's more an age thing than anything more sinister? If I can be bothered to land a fish, the least I can do, if I feel it weighs in excess of ten pounds?, is to weigh it. My records go right back to 1981 when I caught my first ever double and I see no reason to stop the habit just because modern celebrity anglers are so flippant about their catches and associated weight guestimations! Another winter's pike fishing around the East Kent marshes and the wonderful Royal Military Canal was to see me continue to do battle with our apex predator but it was April 2015 when I finally achieved a goal which had taken thirty-three years! Our, now annual, spring trip to Loch Awe resulted in me landing the biggest Scottish pike so far. Twenty-four pounds and ten ounces worth of adrenaline inducing, fishing perfection. An ambition which was launched during the crazy period and that first fateful trip up to the Isle of Bute and Loch Ascog in May 1982. Gazing down on that magnificent fish is one of the most cherished memories I hold - a magical event. 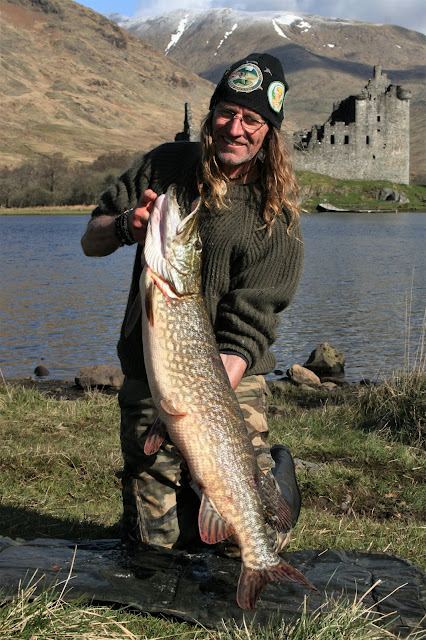 2015 turned out to be a very strange year for me and my angling adventures. As a result of a situation completely beyond my control, I had to very quickly come up with a "plan B" after a River Stour barbel trip was abandoned due to EA weed cutting. The outcome of the decision has played a massive part in the direction my angling has gone ever since. I thought I'd have a bash at some tench which were rumoured to inhabit a local drain, using the same tackle I'd already assembled to go down to the river. Hook bait was 15 mm Halibut pellets and my groundbait was the regular "party mix" pigeon tonic and hemp seed. I was just about to embark on a true angling voyage of discovery - going places where no man (I knew of) had been before? The first session resulted in a stunning 18 lbs Common Carp and, of significance later, an Eel of 3 lbs 6 oz! The carp was an awesome creature and I wanted some more of that so returned, more suitably kitted out just a few days later and managed to land my first "twenty" since February 1984! A stunning wild Common Carp of 20 lbs 10 oz, glistening dark copper and bronze in the early morning sunshine as I posed for my selfies!  Maybe there was hope for carp fishing in these highly commercialised times? There was only one way I would find out. 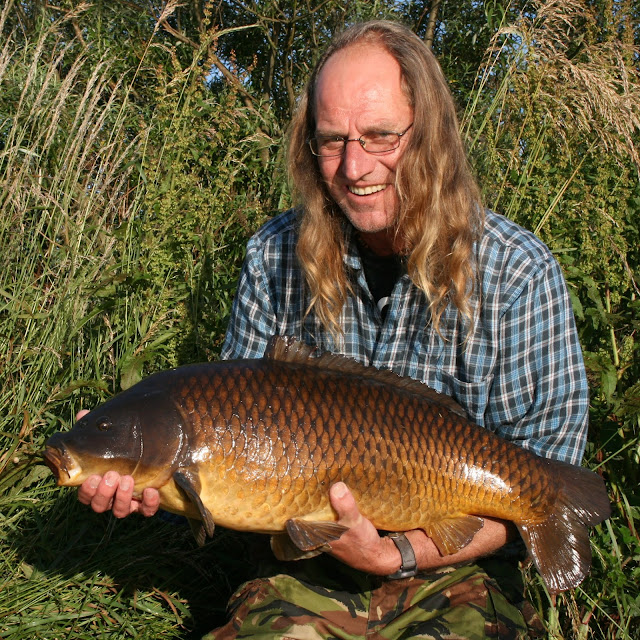 I did spend a bit of time searching the drains for these wild fish, landing a few more superb specimens to a top weight of sixteen, or so, pounds but it was fast approaching October before I found what I was looking for but my attentions had become distracted by a very different project. A comment, by Darren Roberts, way back in the July, about my dismissal of a three pound eel was catalyst to me attempting to catch one by design, as opposed to accident! It was a crazy challenge which developed a life of its' own as the desire to catch an eel by design evolved into "can I catch an eel in every month of the traditional pike season?" I have to admit that I developed a grudging admiration for these tackle tangling slimy pests as the weeks passed. When, on 12th March 2016, I finally completed my quest, with the best eel of the whole campaign, I have to say that I was more than happy with my time spent doing something very few anglers have ever tried previously. 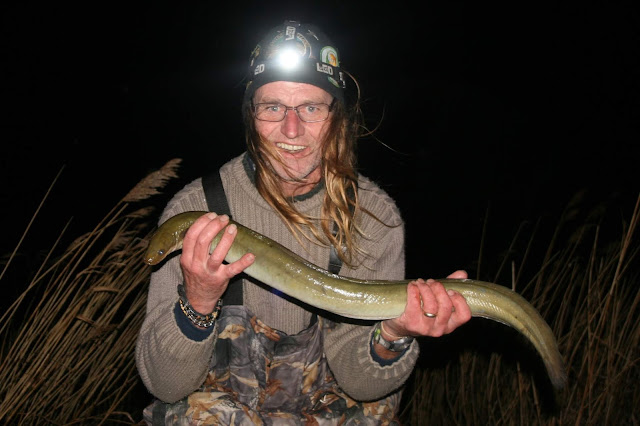 What I've forgotten to say is that in December 2015, I reached the grand old age of sixty and my family clubbed together to buy me a 1959 B. James & Son Mk IV Richard Walker split cane carp rod. Blown away by this gift, I couldn't help myself, I had to go out and purchase another one so I owned a pair! Long story - the most expensive birthday present I've ever brought myself!  The carp out on the East Kent Marshes have the luxury of the traditional close season, those in the Royal Military, however, do not and it was here I set out to catch a twenty on the split canes. Benno was living down at Seabrooke and, as a result, was able to do some pre-baiting for us. It was probably justice, therefore, that he was to take our first decent carp from the venue. A magnificent Common of exactly twenty-four pounds! 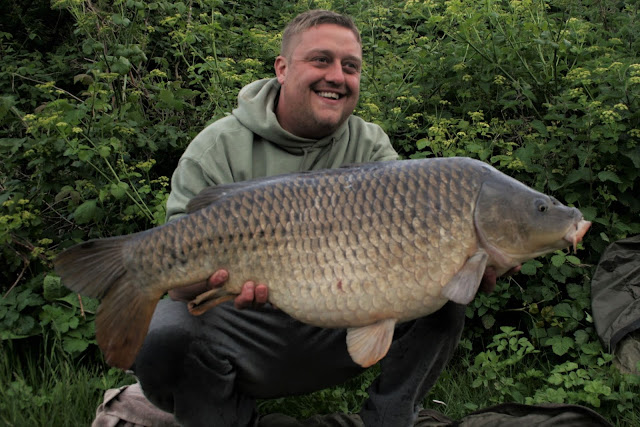 Within a few days I was to open my split cane account with a cracking Leather of 21 lbs 5 oz and I was on my way. By the time it was open season out on the drains, my father's health was deteriorating rapidly. I'd managed a couple of decent twenties before everything ceased as Bev and I moved in with him to provide comfort during those last few weeks. He died, peacefully, in his own bed and fishing doesn't really matter under these circumstances. One thing I had said to him, during a quiet conversation, was that I'd catch him a "thirty" on the split canes and this is a promise I'll fulfil, or die trying. So since that time it has been the single driving factor in my angling focus, not that I've not enjoyed my time chasing other targets? 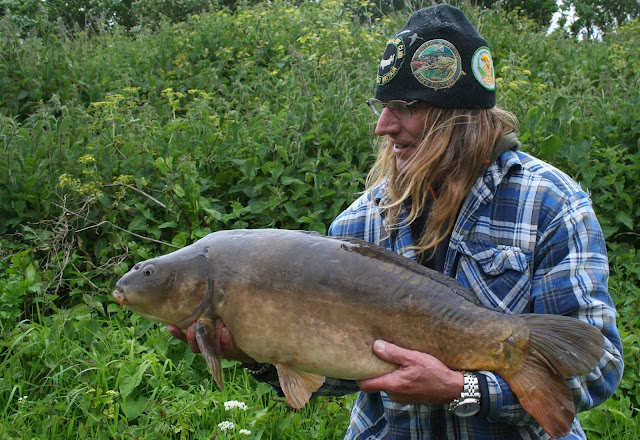 The passing of Bev's father was another event, which my angling has had to adapt to, and now we have Bev's mum living out her final days inside our bungalow, again making massive demands on our free time. I'm forever grateful to The Wantsum AA for time spent at their superb fisheries over at Marshside, such a shame that politics got in the way? I had a blast! Now I have the realistic chance to achieve my promise, to Dad, with membership of a local syndicate where such carp are present, yet not easy! 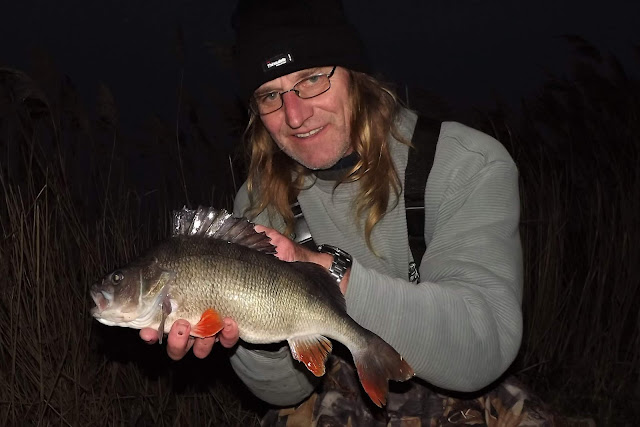 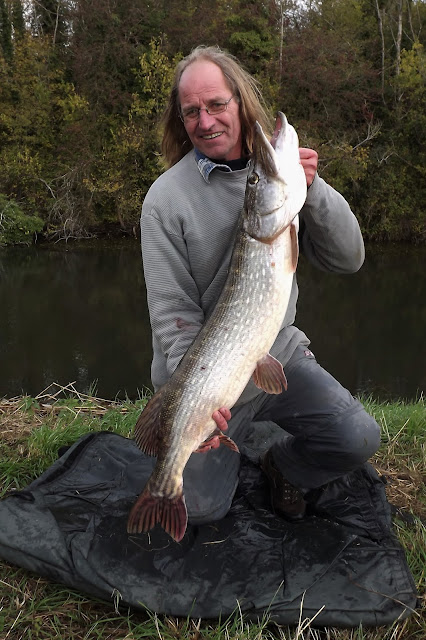 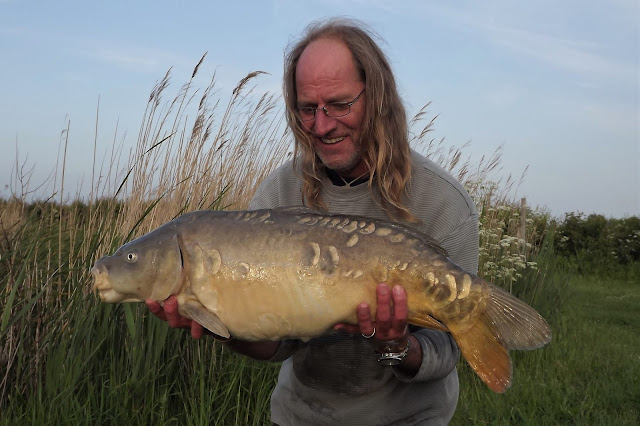 How will this angling adventure pan out? I have no other option than to continue down the road and see what's around the next corner! Sadly, that will now have to wait until after "lockdown" has been negotiated. If you've made it this far, hope you enjoyed my little look back at what has been a very varied pathway through time. Thank you for visiting, stay safe and act responsibly - together we will get through this!