Our fortnight on Kefalonia simply flew by. We were in the company of some very dear, and special, friends and enjoyed the  hospitality of Elaini ("Mumma") and her daughter Agnes - we were all spoiled rotten! To cap it off, riotous laughter and glorious sunshine, meant that it was a holiday to treasure; so many highlights which will be recalled every time any of us look at our photos. Plenty of Mythos moments to assist our enjoyment -  almost the definition of perfection.
I'm not going to post much more about the holiday, Pike season starts on Sunday, but I do have a couple of experiences which might be of interest should you ever visit this wonderful island. Argostoli is the island capital and the main fishing port. Loggerhead Turtles have become accustomed to the local fishing boats mooring up and sorting through their catch, prior to taking it to market. The discarded offal is an easy food source which the turtles happily exploit. To watch these magnificent reptiles at such close quarters is very special, especially when you're standing on dry land! 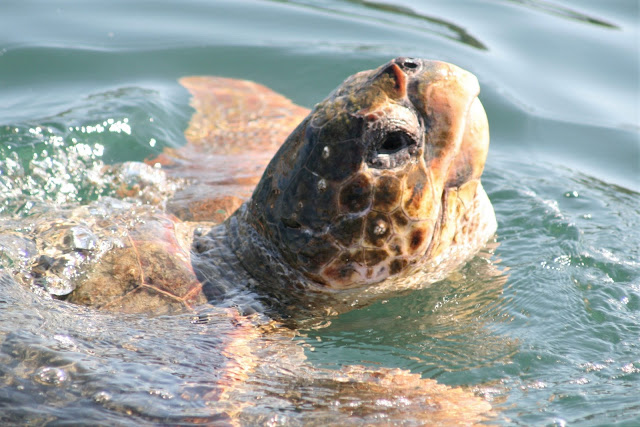 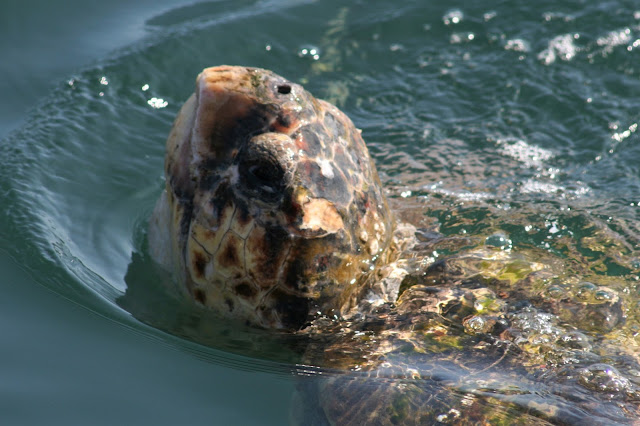 I am rather fortunate in that I've seen huge (almost 2 m) Leatherback Turtles in The Atlantic, whilst Marlin fishing out of Funchal, Madeira. Bev had never seen a turtle, so the look on her face was priceless when we spotted the first. The fact that Carrie-Anne & Craig, Pauline & Leon were also present just made it that much more special - fond memories of some very spectacular creatures.
Posted by Dylan Wrathall at 21:41 No comments:

One of my lasting memories of our 2017 Kefalonian holiday experience is the deliberate torching of the hillsides around Lourdas. Sammy (the resident DJ and general dog's body) had posted some images on Facebook, prior to us leaving, depicting huge areas of scrub and Olive groves ablaze on the lower slopes of Mt. Ainos. To witness these mindless acts, being conducted under the cover of darkness, was all rather sad. What are the perpetrators hoping to achieve?

One direct consequence of this stupidity was the closure of the road up to the National Park area, of which Mt. Ainos is central; thus a major tourist attraction. The fires were allowed to burn, uncontrolled, during the hours of darkness and we watched new fires started by persons unknown, as their flame sticks were carried around the lower slopes.

Fire Engines and planes were able to tackle the blazes during the hours of daylight, but it was very much a case of too little, too late! The local police made token appearances, but the culprits had already moved on to other areas. These were not the actions of isolated individuals, seeking building permission for farmland. Oh no, this was a coordinated demonstration of contempt. Fires were started simultaneously on Kefalonia, Zante and mainland Greece - no chance of coincidence when it happened repeatedly.

I have to make it very clear that at no time did I ever feel threatened by these actions, although access to the peak of Mt. Ainos was prohibited for much of our stay (I did get up there and that's for another post!) I just feel rather sorry for the ordinary folk of Kefalonia. All those honest, and hard working, people whose livelihoods depend upon tourism. Dead tortoises and charred hillsides do nothing to assist the efforts of those who depend upon the visitor's money to earn a living.
Posted by Dylan Wrathall at 23:29 6 comments:

Since we started to regularly holiday around the "Med" I have had many encounters with  mantis, although only two species as I recall. Most of these creatures have also been in some guise, or other, of the nymph stages so it has been a real pleasure to have spent extended time with several adults over the past fortnight.

As a result of minimal bird life, the lenses were set for macro photography and I got some images which are a little different from my usual stuff. By using the extension tubes on the 18 - 55 mm lens, I was able to get up close and personal with these amazing creatures. However, my lasting memory of these encounters was the reaction of Leon, a huge guy and gym devotee, when one I was holding jumped onto his "T"shirt. What a bloody Lionel!!!!

We're back home (at 03.05 hrs this morning) from, yet another superb, holiday on the island of Kefalonia. I've got loads of material to sort through and quite a bit to write about.However, as my blogging has been very lacking in recent weeks I will post a few images to set the scene.

Posted by Dylan Wrathall at 09:44 No comments:

Gift from the birding gods?

It was just around 18.00 hrs, this evening, when I was made aware of a passing raptor by the raucous noise from a group of Rose-ringed Parakeets which had taken umbrage with the intruder. Luckily I was standing in the kitchen doorway and had my optics and camera gear close to hand. A quick scan through the bins revealed an Osprey - F**K - grab the camera!

I rattled off a few shots as it disappeared towards Westward Cross; not the normal direction for overflying birds of prey. Obviously my images are less than perfect, but do provide a record of the event - only my second patch/garden record in seventeen years. A Common Whitethroat was in the garden over the weekend, a very poor image obtained in the half light of a dingy Sunday morning. A few more fish have graced the landing net, all from the club carp puddle, and have included my PB Ide (all 2 lbs 8 oz of it - weighed not guessed) and a very pretty fully scaled Mirror taken off the surface.

There's always something to see

Being restricted in what I can do and where I can go doesn't completely remove wildlife encounters from my life. I still have the garden feeding station although, admittedly, the clientele are rather predictable. But it's now autumn, and almost anything is possible even when stuck in the kitchen doorway looking out into the garden and Newlands Farm beyond. 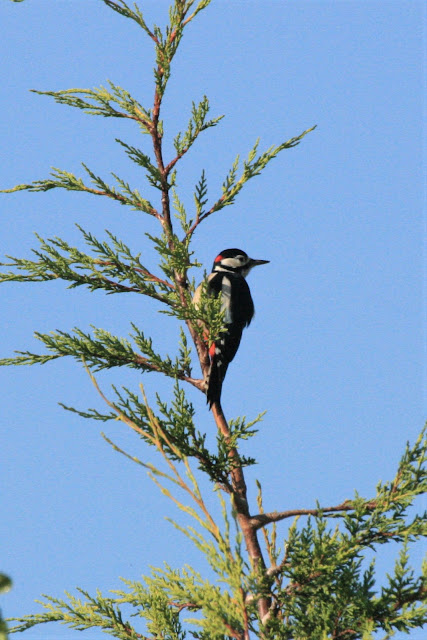 As I'd already made a post, yesterday, I couldn't be bothered to make another as it would have left August with a total of 13 - not that I'm in any way superstitious you understand? It was rather a good morning for birding. It started well when an adult male Great Spotted Woodpecker dropped down into the conifers, two gardens south of ours. Camera already at hand photos were quickly obtained, but the morning really belonged to Sparrowhawks. Eight passed overhead, with a south-westerly bias suggesting migration rather than local activity. A Hobby and an adult Peregrine made up the supporting cast and provided some more camera practice. How I wish I had checked the settings - all the images were taken at ISO 1600. 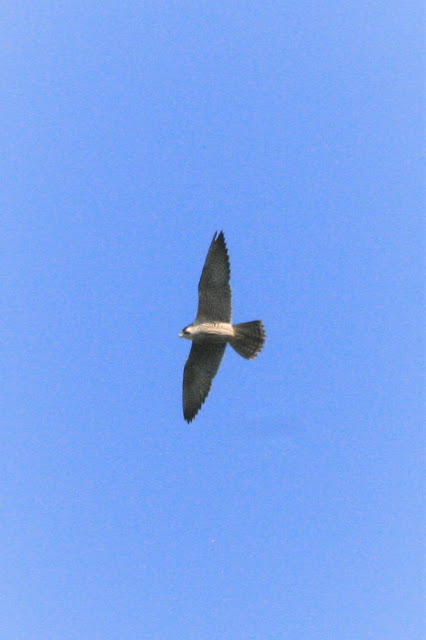 Another bright morning to greet the new month and, at 09.10 hrs, the first Common Buzzard of the day flew low over the garden, pursued by a rather agitated Carrion Crow.