It seems like an eternity since I caught one; January 6th being the date when I last landed a two pounder and the weather has been on a roller coaster ride in the interim. Two sessions over this weekend have seen my drought come to an end. Two perch taken during both outings, the brace on Saturday would have struggled to make 8 oz together! Sunday evening saw a lovely fish, of 1 lbs 7 oz visit the landing net and, as such, mark an upturn in my fortunes. Several tweaks have been employed, none more obvious than my use of Bait Tech Predator Plus bait soak, which has resulted in my use of bright red King Prawn sections.


However, it wasn't as simple as that, carp and bream also falling to this latest development. So quite where "predator" figures in the attraction is lost on me. It's just a great fish attractor; end of! I have given myself  three more weeks before changing tack and seeking a new challenge. Is a three pounder a realistic target from this venue? I'll find out over the next few weeks. Whatever the outcome, I'll be back for some more of these fabulous fish next autumn. My methodology and techniques have come on a long way since the "Black Dyke" sessions, let's hope that this can be continued as the adventure develops?
Posted by Dylan Wrathall at 20:20 4 comments:

A change of fortune

My life is an awfully mixed up affair, at present. No-one's fault, just the way it is and, as such, something I (& Bev) have to deal with on a day to day basis. That my blogging has been a casualty of the situation is of no consequence in the bigger picture. Angling has also been a real struggle, just to keep within the theme, and I'd endured three consecutive blanks leading up to my session, this morning. Out of the bungalow just before 05.00 hrs; I had to call in for some diesel, en  route to the marsh, and it was 06.20 hrs by the time I'd reached my destination. Three rods out before 07.00 hrs, I had just five minutes to wait before the Herring section was picked up and the alarm rattled out it's audible alert. A stern test of the kit before I drew a beautifully marked pike over the net chord. At 12 lbs 7 oz it was most welcome and a really nice way to end the drought. 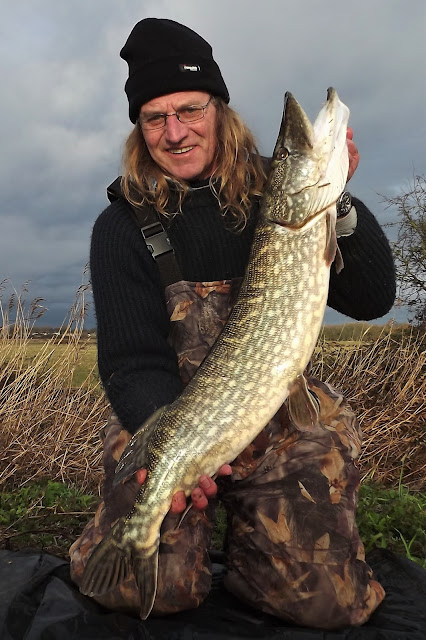 I could have packed up there and then but knew that Bev would still be in bed and any further disturbance wouldn't be well received, should I go home, so back out went a fresh bait. It was almost two hours later that I had any further action. Thankfully I had brought a flask of coffee and was able to keep my spirits up with regular slurps of this sweetened brew.

The next bite was to result in a feisty pike, of 8 lbs 12 oz, visiting the unhooking mat. Returned without a photo, almost immediately my furthest rod signalled a bite and I found myself attached to a fish which had no intention of giving up easily. When I eventually managed to persuade it into the net, I instantly recognised the fish as one that I'd already caught twice previously. This time she was a little under weight, at 12 lbs 8 oz, but very welcome none the less. The weather was deteriorating rapidly, light rain had set in and the wind was picking up by the minute. I had placed the pike into my retaining sling with the intention of getting some record images if the rain abated? There was no point in getting the camera kit wet just for another trophy shot of this fish. A phone conversation with Bev had just been completed when an alarm signalled another bite. This time it was a pike of 9 lbs 6 oz which came grudgingly to the bank, to be placed upon the unhooking mat with my previous capture for a quick record image before they both being returned.

With the rain becoming ever more drenching, in some way due to the strengthening winds, I didn't bother recasting the rods. I packed up, extremely pleased with my efforts, it had been a most rewarding morning.
Posted by Dylan Wrathall at 17:42 9 comments:

One thousand - not out!

A milestone in the Of Esox & Observations blogging journey; post number 1,000. Who'd have thought it? Having risen from the embers of "The Non-conformist" fallout, I have been amazed at just how little angst and controversy this blog has gotten involved in. Differences of opinion are to be expected, no matter what the subject matter, but, by and large, this venture into Blog-land has been a very enjoyable way of placing my slant on things into cyber space, thus sharing thoughts with an unknown audience of infinite diversity. Long may it continue?


Out with the rods again, this weekend, I should have known better. On Saturday morning the opening gambit of Mick, the bailiff, was "you must be f**king mad" - How polite, how reassuring? To be brutally honest - he wasn't far off the mark; I endured a total blank, not a touch on float nor bite alarm. Well if I couldn't catch a perch then Sunday meant I'd go out onto the levels for a bit of pike fishing and so it was. Different venue, same outcome! The only time I heard an alarm was whilst I was getting the rods set up. To top it off I had to move the rods twice due to cat-ice forming in the margins as the dawn broke over the frozen marsh. A spectacular sun rise was enjoyed, despite the lack of fish, with a Barn Owl hunting the reed lined banks well after sun up, a sure sign that prey is difficult to locate in these sub-zero conditions. Four Little Egrets flew from their roost site and there was a small, yet definite, movement of Lapwings heading westwards, high overhead. A Common Buzzard provided the bulk of the entertainment as it hunted from fence posts and telegraph poles. It would regularly drop down onto the ground as if it had located some food item, although I didn't see it catch anything in the two hours I was watching. It seems blanking was a common theme out there?


The forecasters are promising a rise in temperatures, possibly into double figures by Thursday, and I am hopeful of getting back out for an afternoon session,or two, in the coming week. Whatever happens, I can't catch any less.