This "laid back" garden birding challenge is developing into something completely out of the realms of fantasy. I think it's fair to say that those of us who've signed up to Steve's effort have done so in a spirit of camaraderie and a desire to seek a positive during these troubled times. Obviously, the "challenge" aspect will attract individuals to whom competition is part of their make up. No big deal - each to their own, especially under these circumstances. However, challenge can also be a stimulus at a very personal level and exactly where I, and many others I'm sure, feel more at home. Pushing my personal boundaries, whilst enjoying a sense of belonging, due to common theme that has been catalyst to our coming together as a collective. Basically, everyone's a winner!

We're right back to basic patch watching, birding purity by my way of thinking. Our visual and audio functions are in a state of high alert and every new addition to the tally is greeted with a feeling of overwhelming joy and adrenaline. To illustrate my point I would like to take you through a sequence of events that happened yesterday, Thursday 9th April 2020. For some reason I was outside, coffee in hand, just after 06.00 hrs. The hedgehogs had been active around the feeding area as their tell tale tracks across a dew covered lawn revealed, yet I'd failed to get a sighting the previous evening. Still, just one more late shift to navigate then four days off - bloody great! It was a beautiful clear, calm, dawn with barely a breath of wind. Bird feeders topped up and the aviary sorted all I had to do was sit back and enjoy the morning before having to attend that last shift. It was around 06.25 hrs that I spotted, with my naked eyes, a strange bird (jizz?) approaching high, from the west.  Shallow, flickering wing beats, I immediately thought "Curlew" as I raised my bins. "What the f*ck? - It's a bloody Fulmar!" Unbelievable, I was absolutely buzzing and would have happily taken that as my only addition for the entire week. To put this into some type of context, Fulmar is on my garden list courtesy of a sighting, during a raging NW gale, in the October of 2003. To have one pass over the garden during such a period of calm is exactly why birding is so exciting. As Steve posted recently - Expecting the unexpected.

Within an hour I'd added yet another species to my total when I scoped a female Blackcap in the large tree (where I photographed Jay, Linnet, Redwing etc) to the north. Does it get any better? Benno had sent me a photo of a male Blackcap, from his Goodnestone garden, a couple of days back. It was nice to claw that one back. Two additions for the day, I emailed Steve with the news and grabbed a quick snooze before attending that final shift before the Easter break. Work passed without much trauma and I was back home by 21.45 hrs full of ideas to what I hoped to achieve during this break. Hedgehog food was topped up and the camera kit readied for another long wait? The skies remained clear, with little wind, and I stood outside supping on a cool San Miguel, just taking it all in. Chilling in the serenity of the stillness, pondering on just how privileged are we to live in such a wonderful place? My day dreaming was cut short by a series of soft "pip" calls as a pair (?)/small group of Common Scoter past overhead. The clarity of the call indicative that they were very close. Three weeks ago and I wouldn't have had a clue what the bloody hell that noise was? Such is the power of the internet that I'm now well clued up on such stuff, bloggers and observatories from around the UK have been sharing "sound cloud" snippets of these unseen travellers as they migrate north overland. So now I've got Common Scoter on my garden/patch list, but not only once! Within an hour a small hedgehog turned up and I got some lovely photos as it munched away on the "Spikes Dinner" that is on the menu. As it wandered away from the feeding area, I took the camera outside, and was immediately aware of more Common Scoter passing overhead. 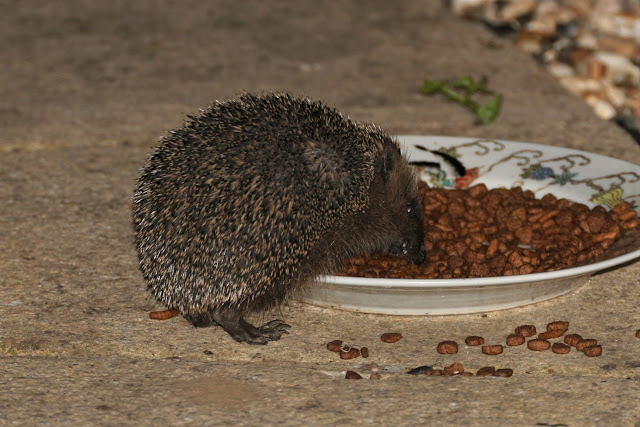 So here's the crux of the NocMig conundrum. If it were not for the sound recordings produced by the technology involved in NocMig I'd never have known what those calls were, or would be ever likely to encounter such sounds in my normal routine. Even a seasoned "seawatcher" won't have heard Common Scoter calling as they pass by over a stormy seascape! So I've got Common Scoter on the garden/patch list because I actually heard them. Is it possible for others to include them simply because they appear on a digital recording system positioned in their "space"?  In these crazy times - each to their own I guess.
46 - Fulmar - unbelievable!
47 - Blackcap - long overdue?
48 - Common Scoter - nothing much more to say!
Posted by Dylan Wrathall at 09:43