Not quite what I was expecting

I didn't blank but, a very small "jack" pike grabbing two chick peas, as I reeled in, isn't the outcome I'd hoped for.  Just wonderful to be back out on the bank again, I also added Turtle Dove and Cuckoo to the year list whilst sat behind motionless indicators. Good stuff.

I saw enough to help me formulate a plan, as time moves forward, but it wasn't the fish, or lack of them, that provided the excitement. With the wind trickling into the corner swim, that I had chosen, my binoculars were in constant use as I looked for signs of feeding fish. The sun was beginning to head towards the western horizon when I espied a very strange shape in the closest lily pad. A bloody terrapin! As you will see, I rattled of a number of images which have allowed me to tentatively id the creature as a Yellow-bellied Slider (Trachemys scripta scripta ) which is native to the southern United States, Florida and Virginia? Obviously been released by a pet owner bored by the responsibilities of keeping such a demanding animal, the sighting certainly added to my session yesterday. 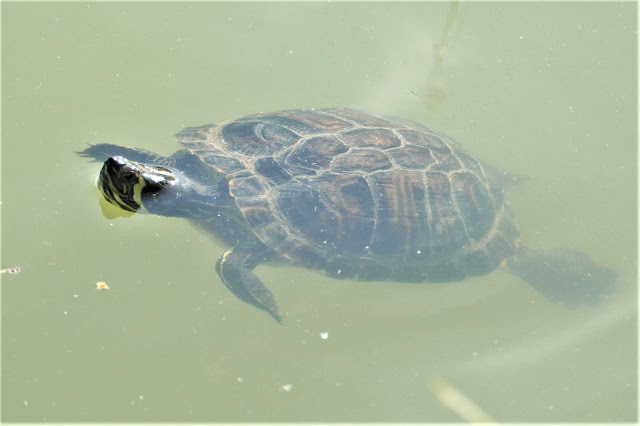 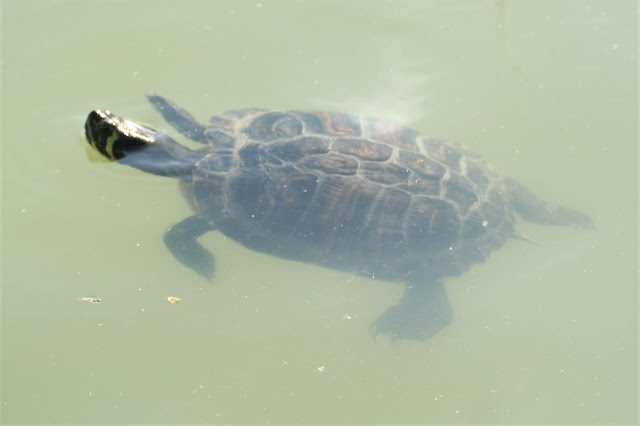 Whilst I was sat in my swim, another member, who was respectful of the social distancing guidelines, came along for a chat and told me about an eel that he'd caught last week. At 5 lbs plus, it was certainly an interesting snippet and something to think about as the season progresses?