It's been a rather weird sort of time, these past couple of days. Obviously the occurrence of that Black Kite has to take centre stage, yet I can't say that I was able to derive the pleasure, from the encounter it warranted, as it was nearly a day later when I realised what I'd seen. The adrenaline moment well gone by that juncture. I now only require a White-tailed Sea Eagle to drift over Dumpton to have the entire Kent raptor list included on the patch list, Hen Harrier being the only other one missing for the garden!


Being a "big fish" angler of many years experience, my immune system must be up there with the best of them. Cooking with lake water, no clean cutlery, dirty cups and plates, surely these antics must have a positive part to play in immune response? Last night I was to discover that this theory might not be as bomb proof as I'd first thought! The Smoked Haddock, which had been stored in the fridge, was a day past it's best before date! "That'll be okay" says I and happily chomped my way though half a fillet before thinking that something wasn't quite right. At 02.00 hrs, this morning, I knew I'd made a mistake. I felt decidedly "here & there" although, thankfully, I wasn't confined to the loo. I got up, purely because I felt so uncomfortable laying down, and went into my study where I grabbed a glass of Watermelon & Strawberry Lucozade.
A day after its' peak, the "Flower/Milk" super moon still shone brightly in the heavens and I thought I might as well have a play around with the camera whilst I was up and about. I used some camera settings which I'd seen on a Youtube offering and clicked away merrily for a few minutes. No point me moaning about the results, they are the best my ancient kit are capable of, good enough for blogging that's for sure.

Whilst I'm outside, using the ten second timer delay, to keep camera shake to the bare minimum an Oystercatcher pipes out it's unmistakable call from the sky above! Gotcha - number 64 on the lockdown garden list! I knew there was a reason for me feeling "Bill & Dick". I kept the back door open whilst I downloaded the moon photos and was quickly aware of some noise outside. A hedgehog had turned up at the feeding station and was munching, extremely loudly, on the biscuits that are on offer. Gone as quickly as it arrived, I feel so privileged to have these animals visiting my garden and will continue to do all I can to encourage them to hang around. 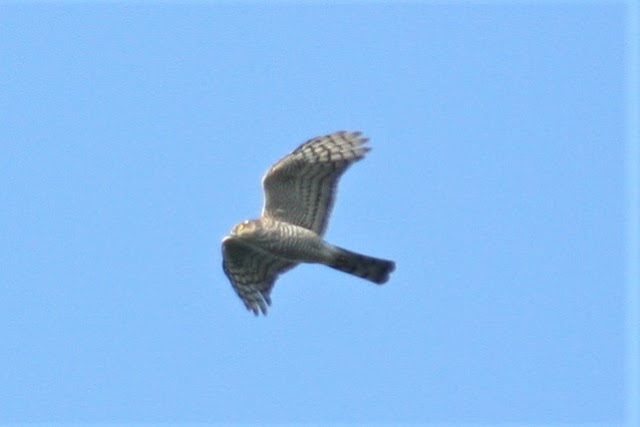 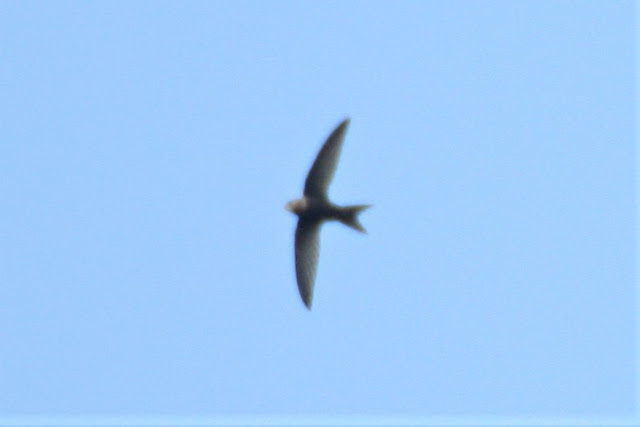 Swift and Sparrowhawk are images from yesterday, I'm now up to 43 species photographed from the garden since Jan 1st. I couldn't have known it at the time, but feel that my decision to attempt such a project, to capture 50 species on camera, during 2020 might just prove to be a good one?
Posted by Dylan Wrathall at 18:51