You'll have to forgive me for what I'm about to post. It comes as a direct result of an email I sent to a small group of fellow bloggers and will, hopefully, lead to some rather amusing posts, on various blogs, and subjects, over the coming weeks? Only time will tell. I'll set the scene by naming two of the major players in this game, both of whom you'll be well familiar with and another, far more shadowy character, who has been a massive contributor via our comments options yet has never produced a blog himself. Steve Gale, Gavin Haig and Richie Francis (Ric to his mates) have been instrumental in this happening, yet I also need to thank Derek Faulkner for his correspondence and input.
Covid-19 has the UK in melt-down. Our politicians and business leaders seemingly powerless to deal with the ever evolving dynamic of this situation, a bit like a rabbit in the headlights?  I'd hope that my previous two posts have pinned my colours to the mast of total bemusement in this current debacle. It was this feeling of utter hopelessness that led to my cry for assistance; these guys came to my rescue and I'm forever in their debt. It's a situation which will only get worse before it gets better and, even the most cynical amongst us, have to acknowledge the huge burden being placed upon the workforce, within our NHS, especially those on the front line in this war against an invisible foe. Just as when "Brexit" was the only subject in the news, now it's Covid-19 and, yet, every now and then a spin off news story will develop. Generally focusing on small community-based efforts to assist those in their midst who need a hand in order to get through this ordeal. Knowing that isolation, be that self imposed or a legal requirement, is going to be a very real situation for so many within our society I started to think about what I could possibly do which might ease the pain, so to speak. There's only so much t/v you can watch and social media will have a huge role in getting the country through this chaos. Being a blogger, admittedly not a particularly popular one, I felt sure that we could use this medium to bring a little rest bite from the madness? "BE KIND" seems to be the catch phrase at present and is superbly lampooned in this cartoon that appeared in The Yorkshire Post - Tuesday 17th March!

With so many poor souls, going stir crazy, I thought it might be a double edged sword, we could use blogger as a tool to entertain the captive audience and grow our visitor stats whilst doing so. All that was really required was an idea - how could we move forward? It was Steve who threw down the gauntlet and I've decided to accept the challenge - so here goes!


A Cautionary Tale
It is the Spring of 2001 and, just as things started to get exciting, an outbreak of "foot & mouth" disease rendered huge areas of the (Kent?) countryside as out of bounds. I was flying, still living off the adrenaline that setting new county year list figures had given me. I'd made my statement and was now well established on the Kent birding map. On 10th April, of that year, I'd been incredibly fortunate to have bumped into an highly excited Ian Hodgson, over at St. Margaret's. where he'd just discovered a singing male Sardinian Warbler. What a result, yet I was immediately made aware that news couldn't be released due to the cattle in the enclosure besides the cliff-top area the bird frequented. Any visiting birders would have to pass through this area to view the bird and, as such, the sighting was never released into the public domain due to fear of spreading this infection to the herd - bloody Kent suppressors at it again! I didn't care a jot, a new Kent/UK tick, it was my initials against the record in the BBRC listings for that year. We were able to justify our decision, to withhold the news of this very desirable bird, using the well being of the cattle as our conscience cleanser. What must be remembered is that the site had open access with a public footpath running right along its' boundary. Did we really make that decision correctly or was there more to it?

Now let's turn back the clock to the mid-90's. The Ash Levels had become my local patch and, because of a chance meeting with the game-keeper, Dennis Joiner, I was introduced to the farming community who owned/controlled this wonderful area of East Kent. Over time I gained permission to wander unhindered across vast tracts of this agricultural land. I was no longer restricted to public footpaths or by closed gates, the world was my oyster. I remain ever grateful for the kindness shown me by Mr Robert Chandler, Paul & Roger Dunn and "Old man" Drew. Such fantastic memories as I discovered the joy of patch watching in an area of the UK where birds were still plentiful and diverse.
It was late autumn in '96 when I found a Richards Pipit in a field which was just over the Chandler & Dunn boundary. Not a lifer, nor even a Kent tick, it represented my first "patch" record and, as such, I felt fully justified to hop the fence in order to secure better views. No harm done, no one offended by my actions, simply because no one saw me. To top it off, I even took Andy Johnson to see it, although we didn't trespass into the field on that occasion. Again; news was not released into the wider domain because there was no public access to the site.
Come 1999, and I embarked upon that manic chase for a county year list record. Although it is true that I actually found 233 species for myself during the year, yet I obviously didn't necessarily find the first one I ticked and there were another thirty species that I saw which had been found by someone else, thus I was reliant upon news being made available via the various phone rotas of the Kent 300 club members in order to achieve my goal. Double standards is a theme which might begin to rattle about in your thoughts if you've made it this far? They certainly have in mine, how much of a bloody hypocrite can one guy be? I'll address this, and other issues, before I finish the post.

So let's now fast forward to Friday 4th October 2013, as I'm walking home from work on a murky afternoon. Completely out of the blue I stumble upon a Great Grey Shrike in the hedgerow between my factory and home. A patch tick, so I was very happy to post this news on my blog, especially because my barbel/chub fishing on the Stour wasn't too sparkling. Being October, it was dark before my post made it into cyberspace, so Saturday morning was when I realised what I'd unleashed. All of a sudden "my patch" was heaving with binocular wielding/camera pointing folk who had never previously heard of Newlands Farm, let alone visited the site.

Despite the clearly obvious/sign-posted footpaths and farm tracks which border the various fields of the farmlands, guys were quite happy to stray out into the crops in order to get their view of the bird. In 1999 I'd have been at the front of the queue as I didn't find one for myself that year. What had changed? The shrike hung around for a couple of days, allowing many local, and not so local, birders to enjoy the experience. I have no problem with others coming to see the bird, my issues revolve around defending the unacceptable behaviour of unknown individuals to the folk who have been kind enough to allow me to go birding around their farmland. Both Nick Ash and Arthur Burbridge, the two farmers whose land make up my patch, have been 100% supportive of my recording the avian activity around the area, yet this episode took a lot of explaining before the status quo re-established itself.
So to where I am now. It has been an eye opening experience looking back at my behaviour and the rationale that I've used as an excuse for my totally selfish viewpoint. This had started out as a post about the issues birders face when trespass is in the mix. All it has done is provided all the evidence required that I would do whatever is required to achieve my goal, yet lack empathy with any others who are also driven by desire/obsession. You can draw your own conclusions from what I've posted, but take a second to think back on some of those moments which have impacted upon you when self comes before all other reason. 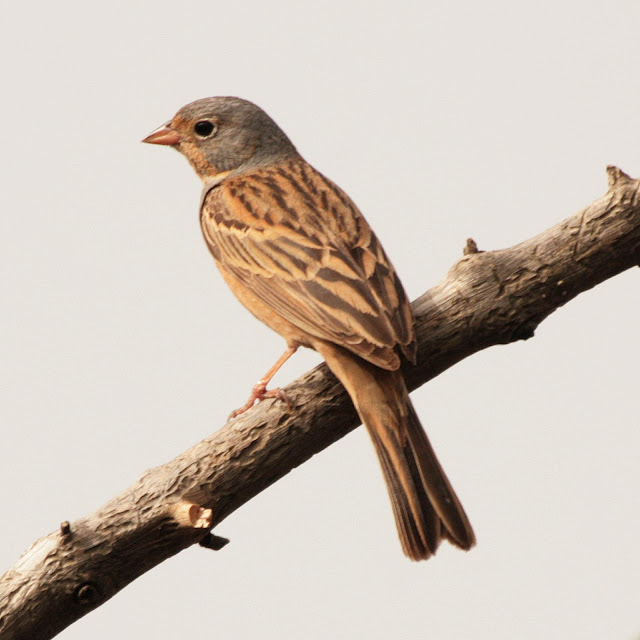 That is exactly what I did when this turned up on Newlands Farm last June - Toodle - pip!