August 1993 and fresh back from the Atlantic Blue Marlin experience in Madeira. Unilever, my then employer, facilitated the relocation to Kent, from Hemel Hempstead. It is a pivotal event in my life, and, obviously, resulted in an interesting, although not painless, pathway to where I'm at today. I mention the Marlin purely because on my return from this ridiculously successful trip, any thoughts of pike, tench, barbel, roach or chub were completely without purpose. How could anything which swims within the freshwater environs of the UK ever hope to compete with sheer adrenaline overdose that a Marlin hook-up evoked? Rods were consigned to the loft as a new obsession took hold. I became a Kent "twitcher" lister. Okay, it took a couple of years to get my feet under the table, so to speak, but I was already fascinated by the county birding scene via the writings of Don Taylor.

Don was a huge personality within the county, at this time. Chairman of the Kent O.S. and county year list record holder. Unbeknown to me at the time, but it was Don who had pointed out a Marbled Teal (Duck if you would rather?) on a roadside island of the ARC Pit, at Dungeness, in the May (?) before I'd made the permanent move. Yeah, it was very much the fascinating tales of how he, and his friends, made the frantic journeys in order to "tick" another species within the county boundary which had me enthused by every sentence. His two books still have a very special place on the shelves within my study alongside the KOS Bird Reports for the 1991-2000 period.
So I bode my time, whilst establishing myself within a very clique orientated Kent birding scene. I had myself a superb local patch, out on the Ash Levels. Just a mile, or so, up the road was Sandwich Bay Obs - still a ringing centre, not a community coffee club, at this time and what a crazy place? Full of characters and extraordinarily talented birders; my introduction to Kent birding was a very pleasurable period and that county year list was a goal to which I became drawn as the years passed.

So on to 1999 and that quest for a county record year list. Mobile phones had just become part and parcel of the birders kit, although it would be a few years before digital image technology would become equally available. The Kent 300 Club had just kicked off and as a result those of us within the clique had a list of contacts that needed to be called should a good bird be encountered. Jerry Warne, at Birdline SE was party to this and, as such, information was incredibly quick to circulate within the gang. Chris Abrams had got two phone rotas in place, and what a great piece of fortune that it coincided with the best year in the history of Kent birding. The stars had aligned to allow me the best chance of setting new year list figures as I now was well established within the Kent crowd and to top it off Unilever had given me a two day week contract (24 hrs - 2 x 12 hrs over the weekend) so free time wasn't an issue.  This single factor was to allow me to spend all, or part, of twenty eight days at Bockhill Farm, St. Margaret's Bay, during that October - result! A car, limitless time and enough dough - I couldn't fail? 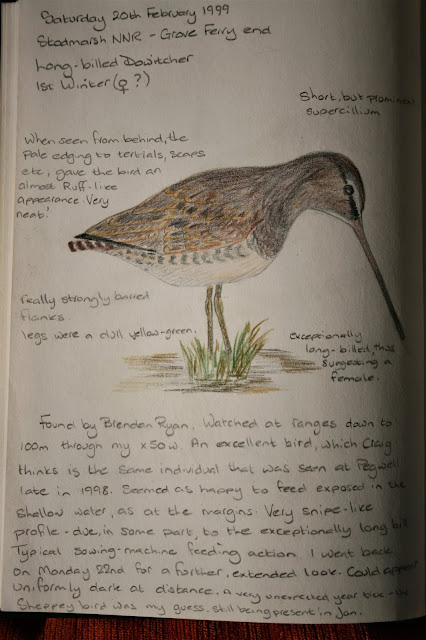 The target was 242 and I smashed it! I finished the year on 263 species, which didn't include Yellow-legged or Caspian Gull, as they'd not been split, nor the Pratincole sp. that I'd found over Grove Ferry whilst the Baillon's Crake was still in residence. I missed Iceland Gull and Stone Curlew, both of which were at Dungeness, but still ended up finding 233 species for myself during the year.  My total was registered, all sightings accepted by the KOS and associated birding authorities. I have no idea as to whether this still remains a record? To be honest I don't really care. It was a fantastic year, huge enjoyment, camaraderie, adrenaline and umpteen other experiences which made for lasting memories and friendships. On the flip side, it cost me my first marriage - so how clever is that? Under no circumstances can any sane individual think that this is a price worth paying? However, without this event I'd never have married Bev and be in the very comfortable position I now find myself. Clouds and silver linings? It was the discovery of one of my old note books, not a diary as such, but more of a highlights collection of birds seen that I've been moved to write this blog entry. There are very poor record images, via the medium of paper and pencil, which just demonstrates how far we've come since the advent of the digital era and exactly why the mobile phone/camera has so revolutionised bird recording. 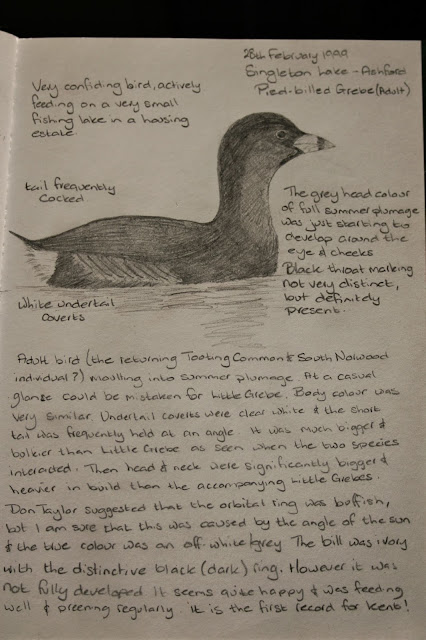