I've not cast a line for several weeks and, if things remain as they are, can't see me being able to do so for many more to come. My syndicate  renewal fees are due to be payed at the start of April, yet I wonder if it the money could be better used as I'll not be able to get out all the while this pandemic dominates our daily lives. Decisions, decisions! To be honest I'll probably pay my membership, but what if I was self-employed or laid off? £250 might keep food on the table for a few weeks, rather than spent on a ticket that can't be used. I suppose it's for each of us to base our decisions on our individual circumstances.
I was rather drawn to a post, it doesn't matter by whom, which questioned the Noc-mig technology being used by some "competitors" in our laid back garden challenge. My initial reaction was that I was fully behind any such records being null & void. However, after a day to ponder on such trivia, I've altered my stance somewhat.
Technology has drastically changed so many aspects of our everyday lives. Mobile phones and digital imagery are two areas which we now take for granted as are, indeed, the various social media platforms by which we are freely able to communicate our slant on the world. If it were not so Steve Gale wouldn't have been able to garner so much support for our little project in such a short space of time? As an individual, I am wholly reliant upon electronic bite alarms whenever I go fishing, especially if I'm tucked up akip in my bivvy. And what about mothing, surely an un-attended light trap, being emptied next morning is much akin to letting some fandango gadget record the sounds in the night sky whilst you are sound asleep. I think the bottom line is that we must be able to allow each to their own.
There is no prize, no highly esteemed kudos, associated with the garden bird watch challenge. Who will be the winner, well we all will? We've come together in order to find a positive distraction from the reality of self isolation imposed due to the Covid-19 pandemic which we simply can't ignore. I liken my involvement to running (?) my first ever London Marathon (2000) which was an incredible experience to be part of. When I crossed that finish line, in a time of 4 hrs 32 minutes, no one could take that feeling of elation/achievement away from me. Of course I hadn't won it, didn't matter a toss, it was the taking part and completion which made it such a personal triumph.
So there you have it - my very personal overview of what we've got ourselves involved in. Please feel free to hold alternative opinions, it won't be the first time someone has disagreed with me. 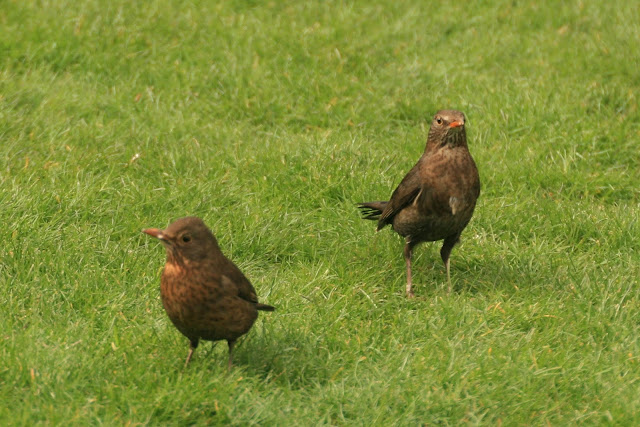 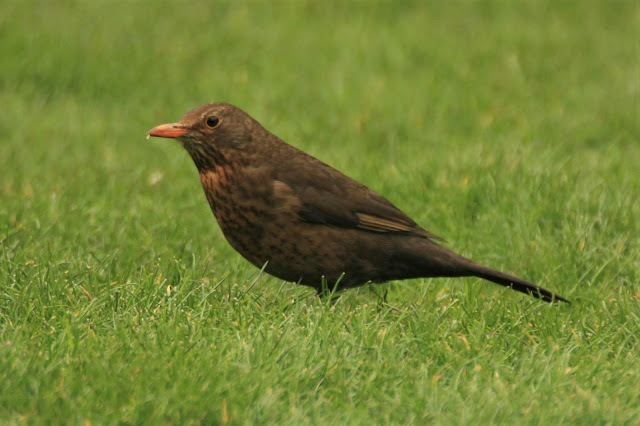 So what's been happening around Dumpton? Not too much being the very simple answer. Two female Blackbirds appeared on the lawn and, I would assume, were new arrivals?  A phone conversation with my youngest brother, Simon, who lives in the delightful Buckinghamshire village of Aston Clinton, was quite amusing. He has recently undergone heart surgery and is in a period of twelve weeks confined to barracks. I'd previously told him about the garden challenge and he reported that he was currently on eighteen species. He said that Raven was a good bird for him and that he'd also recorded a single Cormorant headed towards the Tring Reservoir complex, no doubt. "Bloody hell! I still haven't seen one yet" We exchanged the usual pleasantries as we said our good-byes and I returned to the task of clearing the debris from our patio area. Huge numbers of Wood Pigeons remain  around the newly planted fields to the north of Vine Close and provide quite a spectacle when disturbed by passing dog walkers, joggers or cyclists.
Chores completed, I made the effort to dig my trusty Kowa TSN 823 (30 x eye piece) out of retirement and attach it to my Manfrotto tripod which has been part of the fishing kit due to my requirement of self take images. So there I was, stood outside, scope, bins and camera at the ready. Very impressive, almost like I know what I'm doing when I spot three Cormorants flying in from the East. No time to check the camera settings, I fired off a short series of images and have to be grateful for the photo shop technology which has enabled me to rescue one of the pitiful efforts. 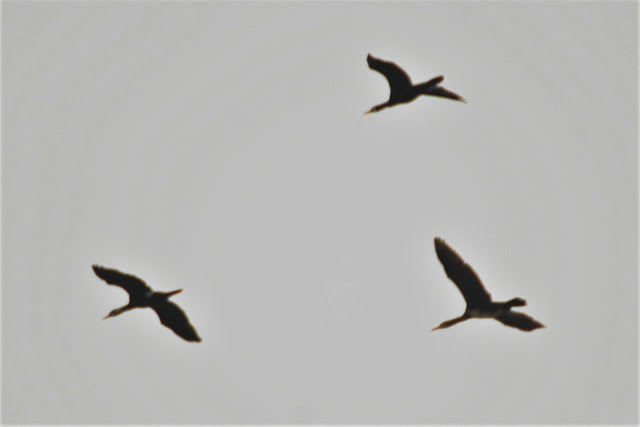 33 - Cormorant - Did make me smile when I rang Simon to tell him about this latest addition to the list.
Posted by Dylan Wrathall at 10:13