I am in absolutely no doubt, had access to carp fisheries been so straight forward, in the 1980's, that I'd now be a full-on, 100% obsessed, carp angler. The term "carp fever" has every aspect of this single species pursuit encapsulated within those two simple words. Love 'em or hate'm, Carp cannot be ignored, especially if you, as I now am, are a resident of Kent! 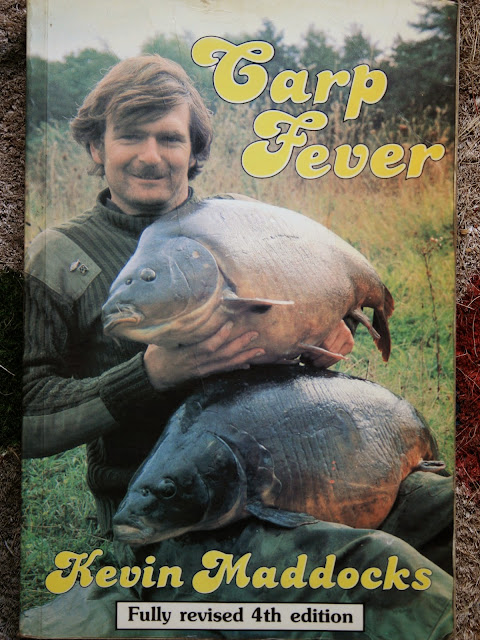 When Kevin (Maddocks) wrote "that book" - there was no turning back; carp angling and the demand for carp fisheries had been promoted to such a level that interest in all other species of coarse fish, away from the match circuits, became virtually obsolete; relegated to a minority pursuit? Barbel have risen from the aftermath to have evolved into a sub-cult. Many failed, carp, anglers changed allegiance and used identical, although slightly scaled down, tactics in a river instead of a lake. (I sometimes wonder how many then become failed barbel anglers?)

So where's this going? Being a disciple of "The Dick Walker School of Angling" - I cannot find it in my soul to remove watercraft and a level of respect for my quarry, from my approach to this wonderful hobby. My modern day counterparts are no longer of this ilk, they are ruthless technicians who would no more know a Peregrine from a Woodcock than a Stone Loach from a Minnow and care even less for the other creatures which inhabit the waterside environs that they happen to frequent. When Dick used his angling skills and intellectual thought process to deceive "Clarissa" from the weedy depths of Bernithan Court (later to be "code named" Redmire Pool) he was perceived as a gentleman angler, a naturalist and sportsman; held in high esteem by many involved within the countryside. With the possible exception of Chris Yates, today's high profile anglers are so far removed from this stereo-type as to be soulless caricatures of obsessed robots. Gone are the requirements for field skills, watercraft, any appreciation of the surroundings or the wildlife - all in the name of carp angling. Realistically I don't see this situation as a problem, more of a manifestation of the progress of time and the modern day need for instant gratification. It really doesn't matter what I think, I have no input or influence on the direction specimen angling is headed. I just have to go my own way and seek fulfilment in whatever manner befits the occasion. I'll set my own challenges and measure my successes/failures at this very personal level. I now go angling for  enjoyment, not to please, nor impress, others who see statistics as the only indicator of prowess. (Sadly, this has not always been so - in much the same way that "twitching" became a massive part of my involvement in Kent birding - there was a time when seeing my name/photo in the angling press was a major part of my life's purpose)

My night session at Sandwich was, very much, a continuation of my quest for knowledge, as I attempt to use some of my past experience to resolve modern angling situations. I am a particle angler - I love the thrill of building up a spot then tricking a fish into taking your hook bait, purely because of the confidence it has gained from a sustained baiting program. It might be a six hour session at a commercial but, could just as well be a prolonged period of pre-baiting on a local drain or The River Stour (both ideas for the coming Summer) On Sunday my reward was a 16 lbs 12 oz Mirror which fought like a tiger and provided a stout test of my terminal tackle. I also got done by another fish, probably a "scamp" Common, which had run me through an entire reed-bed before I'd reached the bloody rod!

My love of this type of fishing is a direct link to my past - the Mr Crabtree era! It is close range, usually a gentle underarm flick, the width of the RMC,  I've no requirement of spods and spombs, my bait is introduced via a catapult or by hand. I have no qualms about using pva (solid bags or mesh) nor coated braid and safe-zone leaders with lead clips. I want the best bait presentation I can achieve and, if this modern technology will assist my cause, I'm all for it. However, because my spots are so close to my position, I still require the watercraft and stealthy approach which Dick Walker promoted way back in the 1950's. Modern distance fishing is "crash, bang, wallop" by comparison! When you fish at distance, the need for concealment, and quiet, is not a primary consideration. This style of angling is more focused on rig presentation and the anti-tangle properties of the set-up. To be successful any modern individual has to be just as skilful with their tackle and techniques as anything  Dick had in his armoury, just the general watercraft is missing.

It would probably be fair to say that anglers, of my generation, gave carp far too much credit for being impossible to catch. We raised them up, onto another level, which helped keep the mystical qualities of their cunning and tackle awareness at the forefront of all our efforts. Once Kevin had blown the lid "clean off" of all the tight knit secrecy of the BCSG (British Carp Study Group) - understanding of the methodology required to be a successful carp angler quickly became common knowledge and advances rapidly followed as more anglers joined the fray. The rest, as they say, is history. Today I can watch, via the wonders of Youtube, umpteen very capable carp anglers, all of whom are regularly catching fish which are of impressive dimensions. Yet, somewhere along the way, there is a massive gap in what I perceive to be a good angler and this current portrayal of said person. The thing that I think is missing are the personalities, there are no Ritchie McDonald's, Rod Hutchinson's or Roger Smith's, there's not even a Jim Gibbinson (he was the sensible one!) figure. All that I see is guys catching massive carp, using boillies, at range - the further the better, generally in France, but not always. It is all very matter of fact, there doesn't seem to be any enjoyment involved - almost like another day at work?

Fortunately I am no longer a player in this game, I've opted right out yet, surprisingly, discovered a world inhabited my many like-mined individuals. We don't read the angling weeklies, we aren't members of exclusive syndicates, we are simply individuals who go fishing.... to be continued!