Bev has changed her working hours and, today, with me on late shift, we were able to take a drive across to Deal to have breakfast on the pier (there's a café on the end! - we didn't take a picnic). It was a lovely morning and I had high hopes for a year tick, or two, as I enjoyed my brekkie. No chance, the sea was dead - two Turnstones, two Shelduck and a Carrion Crow, all south, was the sum total of my sightings.
Back home before mid-day, via Dad's and the recycling yard, I was out in the garden, enjoying a pre-work cuppa, when I heard the unmistakable "rattle" of a singing Lesser Whitethroat. It was in a large Cherry Tree, two gardens to the south but, by the time I'd grabbed the camera from indoors, it was in the Elder above the garden shed. I didn't get a chance of a record shot before it moved on - no big deal but the record is exceptional. Only my third Lesser Whitethroat for the patch, and the first for the garden, the other two being Autumn sightings. There was quite a bit of gull activity due to the harrowing of the field directly beyond our hedge. Herring Gulls dominated, but there were also a few Lesser Black-backs (almost certainly adults from the Pyson's Road colony) and, best of all, a 1st summer Black-headed Gull. May records of this species are very uncommon here. Fortunately I was able to grab a few shots of this individual as it drifted about above the garden. 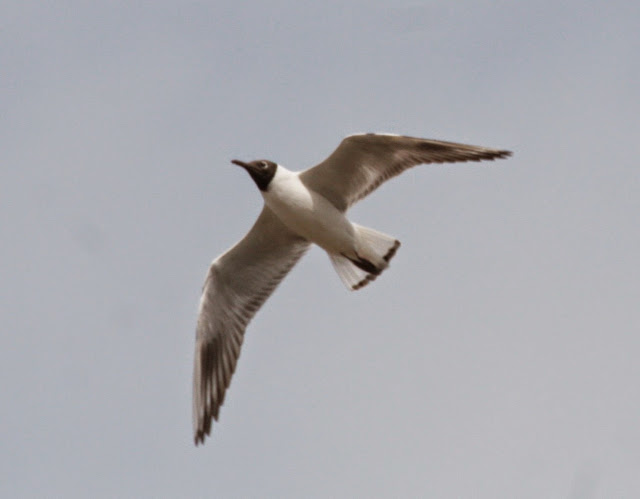 The walk to work was made so much more pleasurable by the recording of a Yellow Wagtail out in the potato crop, a Common Whitethroat in the remnants of the Old Rose Garden and my first Painted Lady butterfly of 2015 - good stuff and excuse enough to go patch watching tomorrow morning.