The results of the January 2013 RSPB "Big Garden Bird Count" have been revealed and an impressive piece of data collection it has been; 590,000 households providing records for the boffins, at The Lodge, to diagnose on their cyber data-base. A great PR exercise and a nice example of "people science" - those guys involved with the organisation and promotion of the count should be justifiably proud; it is the biggest of its' kind anywhere in the world! Several of the employees at Fujifilm SIS have told me about their kids getting involved within a school project, so it has implications way beyond simply counting birds - getting the next generation aware of our natural heritage being paramount to the continued support for the multitude of conservation charities that serve as a "reality check" to the never ending quest of business and politicians (local and national level) to seek the improvement/development of our countryside. I could easily get on my soap box and get completely side-tracked, by this, but will hang fire until another day.
I admit that our garden wasn't part of the count, but I still got involved with this project by helping out in a couple of gardens with my workmates kids. It is great to be able to share the simple enjoyment to be had, from looking at very familiar birds, with those who have yet to learn the basics.
From the Thanet perspective, I always thought our garden was quite good, it certainly appeared to be in comparison to the two that I got involved with; however, looking at the results I have to concede that we are very average? I have picked a few examples, of birds in the "Top 20", that might demonstrate that there is huge geographical variation to allow the RSPB to produce these figures - so remember they are for the UK and not Thanet!

No.1 - House Sparrow (Passer domesticus) - Yes we do still have House Sparrows nesting in our bungalow (3 pairs) but they are not resident and very rarely visit the garden feeders. A January count would have been zero! A chat with Barry Hunt and Mickey Baldock (Reculver old school birders) will reveal a regular sequence of historical movements of House Sparrows away from Thanet for the winter; something that it borne out by my own sightings from Newland's Farm - we have decent numbers up until late-autumn then very few over wintering individuals?
﻿

No.4 - Starling (Sturnus vulgaris) - I can go three months without seeing a Starling around Newland's; such is their scarcity over the winter period. They do nest in the buildings around West Dumpton but, during the winter, they are virtually absent. There is a small winter roost at Pyson's Road, with another one in central Ramsgate, but if added together it wouldn't pass 1,500 birds and they certainly don't use the local gardens as feeding areas when they are in the vicinity!


No.6 - Chaffinch (Fringilla coelebs) - Bloody hell! Chaffinches are really top birds in our garden; 2013 has seen an influx on a scale without president - up to 30 birds at a time feeding under the garden feeding station. This is in March, however, and a January sighting is on a par with a Polar Bear swimming up the R. Stour!

No. 8 - Goldfinch (Carduelis carduelis) - Yep!; they're on the garden list - January? Not a chance!
I can say that that I have been able to record Goldfinch in every year since we moved here in November 2000 - passage migrants in autumn, just like Siskin, Brambling and Crossbill.

No.13 -  Coal Tit (Parus ater) - I have as many garden records of Dartford Warbler, Purple Heron, Red-footed Falcon, Honey Buzzard and Goshawk; they are are on an equal footing of ONE each! Not bad for a species in the top twenty of the most common garden bird of January 2013

No. 18 - Common Gull (Larus canus) - A mis-nomer if ever there was one; common they ain't! I see this species regularly throughout the winter, although always overhead. As a garden visitor, they would represent royalty - my Herring Gulls (now there are six!) are very frequent visitors and I can't help but wonder if the same glitch in the system as produced Tree Sparrows; mis-id'd female House Sparrows (No.2!!!!) some years back couldn't be responsible for this particular result?

From my own observations I find it difficult to believe there is no place for Rose-ringed Parakeet, Sparrowhawk or Song Thrush? All three species featuring highly in my daily garden log - I've quoted it before, and I'm sure I'll use it again. "Lies, Damn Lies & Statistics"
I am in awe of the scale of this exercise but, for the life of me, cannot understand the worth - beyond the chance to allow another a new generation to get involved? The state of the nation - possibly?

A few bits from the garden recently, the first two Chiffchaffs of 2013 on Saturday, were typically brief, but I did take the chance to grab an image of a Comma (butterfly) this morning when one was discovered sunbathing (in a blasting cold easterly) on our drive. 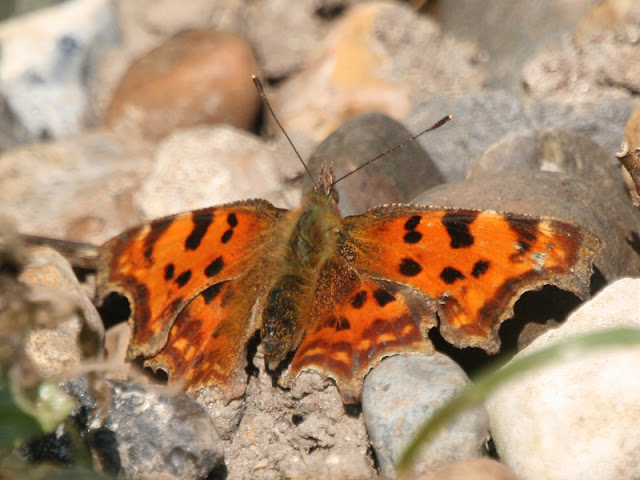