Quite an enjoyable morning at work, strange as it may seem to some, working with a young guy who has just been called back - he's a temp who had worked with me in the run up to Christmas. He tells of a harsh world, out there on the dole, there is just no work around Thanet. I would like to think that FSIS can continue to grow their digital ink business and create a future for Shane and others like him. 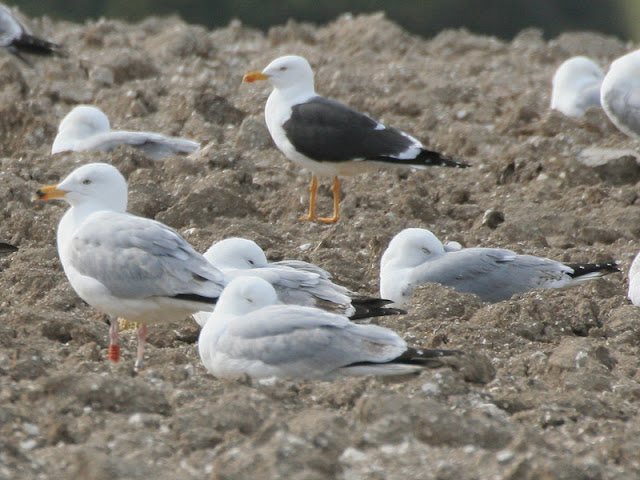 Bev finished work and arrived home around 15.00hrs - telling me she "fancied a trip to Westward Cross!" I saw the possibilities of a "Brownie Points bonus" and some birding - so offered to drive her over there and then continue across to North Foreland for a Wheatear hunt. Worked like a charm; "I'll ring you when I'm leaving Joss Bay" being my final words as I dropped her off in the car park. I then had the luxury of a couple of hours to wander the cliff-top and search for my, thus far, elusive quarry.
I parked the sleek Italian roadster by the Pumping Station and immediately started my session by scanning the gull flock that was roosting out on the ploughed field behind me. A smart adult Lesser Black-back and a C-R 3rd/4th summer Herring Gull being the best I could muster. I had no chance of the ring code, using my binoculars, so grabbed a few shots with the EOS 400d in the hope that digital technology might get a result - it has! The ring is a North Thames Gull Group orange/black code HT7T - not one that I can recall seeing previously. As with all my C-R sightings, I will post the results as soon as Paul Roper and his team are able to respond to my report.

I hadn't finished walking around the perimeter of the pumping station when I saw my first 2013 Wheatear - its' white rump flashing as it flew, low, across the ploughed field. There was another, and another etc, etc .. until I had at least six birds in view at various points around the field. However, with the sun hidden behind some rather ominous clouds and the birds showing absolutely no signs of cooperating with my photographic attempts, I mad my way up the cycle path towards Kingsgate Castle and The Captain Digby beyond. At least three Small Tortoiseshell butterflies were seen along the edge of North Foreland golf course and there were odd Chiffchaffs calling from the thickest areas of vegetaion. The first, of many , Swallow was noted as it sounded the alarm at a passing Sparrowhawk and I enjoyed some time watching the antics of the local Fulmars as they patrolled the cliff-top. Out at sea there were a few Gannets moving slowly north, but little else to bother with. I slowly made my way back towards the car, finding a group of nine Wheatears (the same birds?) feeding around the beach huts in the Joss Bay car park. Flighty as before, I did manage to grab a few shots, as the sun broke from behind a thick bank of clouds. The result is rather pleasing - if I do say so myself.

The rondezvous plans worked a treat; so everyone's a winner? Back home in time to get our evening meal prepared - well happy! All that's require to do now is contact NTGG with my latest sighting - something I'll do after we've eaten.
Posted by Dylan Wrathall at 19:46