I was going to post this stuff yesterday but, I got side tracked and, ended up going to The Racing Greyhound for a meal instead! Bev and I went down to Dover yesterday afternoon, so that she could have a wander around the De Bradliegh Warf shopping complex and I could take a look in at Channel Angling. Great plan, but found to be sadly wanting due to half day closing on Wednesdays! Not that it made too much difference, I had my camera and binoculars in the boot as "back-up".

So with Bev perusing the delights of the designer outlets, I took a stroll around the harbour - well the marina and The Prince of Wale's Pier. The sun was shining, through a hazy cloud, and it was very pleasant just being outside. There was a large shoal of Thick-lipped Grey Mullet (Chelon labrosus) in the shallow dock, right outside the De Bradliegh entrance door, so I stopped for while to watch them as they fed in the gin clear water. My attempts with the camera providing me with some distorted images due to the ripple on the surface.

I constantly scanned the local Herring Gulls, looking for C-R's, before I ventured out onto the pier for a short stroll. There were seven Great Crested Grebes feeding out in the basin, two of which ventured very close to the pier. I grabbed several shots, although when the birds were almost underneath me  the images are not particularly pleasing, some do justice to the wonderful plumage. A Rock Pipit and a couple of Sandwich Terns added to my enjoyment before it was time to collect Bev and pick up the tab! 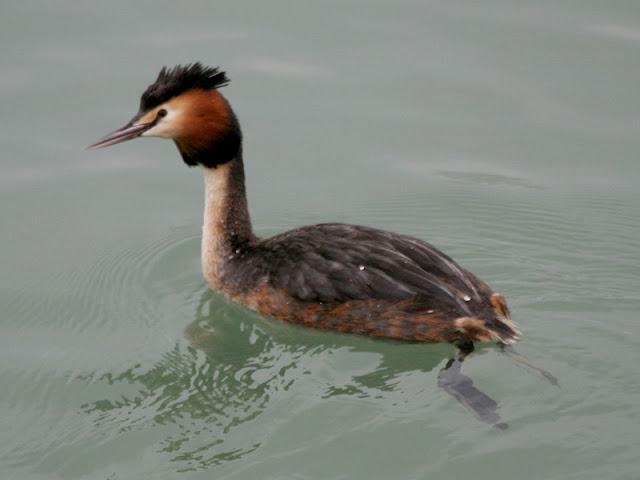 My walk across to Pyson's Road, this morning at 05.35hrs, was made in the growing light of the early dawn, allowing me to discover a group of 5 (decked) Wheatear and an unknown number of Yellow Wagtails that were "tseeep-ing" away out on the fields/or overhead? There were a pair of Grey Partridge, in the vicinity of The Old Rose Garden" the female of which has an injured wing and is unable to fly. Will she survive to breed?  There is a vicious SW wind blowing this afternoon, knocking over our dustbins and rattling the windows yet, out of the breeze, the sun has some warmth and insects are very conspicuous - Spring has finally sprung!
Posted by Dylan Wrathall at 15:36