I took my dad up to Bourne End (Herts) to spend a little time with my brother Tim, and his family (Julie, Luke & Joshua) - there are plans to hold a memorial service for mum in the local church, so that many of her friends, acquaintances and former pupils, who were unable to get to Kent, can have their chance to say good-bye.

Dad seems to be holding up remarkably well; sixty years of marriage must take a hell of a lot of adjustment when suddenly there is only one, of the couple, remaining! We made good time, on our journey from Ash, arriving just before 12.30hrs. - a coffee and a chocolate biscuit later, Luke, Josh and myself were on our way across the A41 for a quick wander around Little Hay Golf Course and look for a few raptors - so common are they in the Hertfordshire countryside. We didn't get as far as the A41 bridge, before a pair of Common Buzzards appeared overhead. The light levels were atrocious and so were my efforts at a photo! 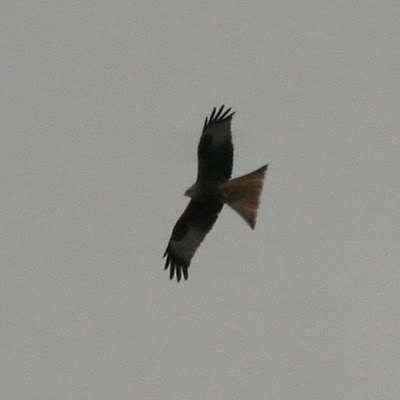 Luke was more interested in finding golf balls (he's a county player) whilst Josh & I contented ourselves looking at the local bird life. We saw a few bits, including Kestrel, Redwing, Long-tailed Tit, Goldfinch and Woodpigeon before I spotted our target species, gliding high above a distant ridge. An adult Red Kite allowed me to grab a series of hopeless record images before it drifted off towards Boxmoor. We ended up in The Anchor, for a swift "light ale" before my time to return home arrived.
Not the greatest trip I've ever had but at least I know that dad is safe and I will be back, very shortly, to support the Hemel gang as they get a chance to pay their respects to my mum.
Posted by Dylan Wrathall at 21:18