It would seem that the van won't be back on the road until at least early next week. The front, lower, suspension arms are being replaced tomorrow, but that bloody flashing air-bag light will not be sorted until after the weekend - at a cost of £450+ (Robbing bastards!) I can moan all I like but, not having the funds to buy another one, will have to pay to get the situation fixed. With the end of the Pike season (traditional, that is) fast approaching you might imagine how gutted I am about not being able to get down to the RMC for that final "double" which would be the icing on the cake! Still, if I can't go fishing there's plenty I can do. I gave the lawn its' first trim, of 2022, yesterday and have started to get the pots and hanging baskets assembled in readiness for the Spring.

I've been running the moth trap, sporadically, since January and have managed to attract just five species, thus far. Three macros and two micros being the lowly return for my efforts. Light Brown Apple Moths have been regular visitors, all the other species being represented by single individuals. The Chestnut, Early Thorn and Common Quaker are the macros, the other micro, however, is a new species for me. Agonopterix yeatiana (Coastal Flat-body). As boring as they come but, if you don't take the opportunity to look, you'll never be able to make that assessment for yourself. 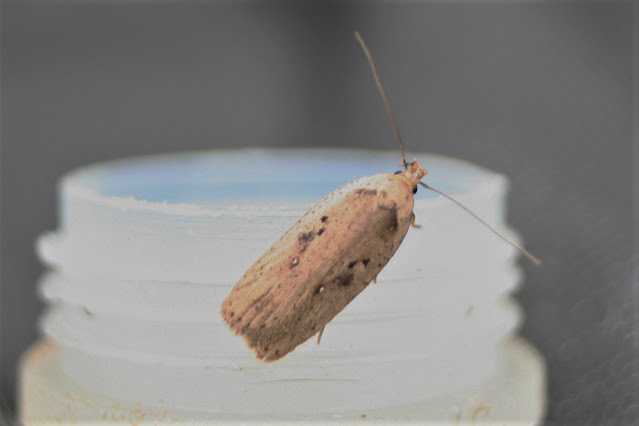 Time to get the hedgehog feeding station back up and running plus the local foxes are getting very vocal, so it might be worth setting up the camera to see if they'll come to some kitchen scraps? Three Greenfinches are regular visitors to the feeding station and the first Chaffinch of the year was present this morning. Yeah! I might not be able to catch a Pike, right now, but there is so much more I can be getting on with while I wait for the van to be fixed.