I have to credit the total blank session, which I endured on Wednesday, for my decision to move my focus to another section of the RMC, some three-quarters of a mile east. And so it was, at 06.55 hrs, this morning, I had three baits in position as I awaited the start of another new day. It was a beautifully clear and still dawn, with a light, but widespread, covering of frost. If ever there was a "Pike Fisher's dawn" this was it! At 07.45 hrs, the middle alarm signalled a bite and I was quickly into battle with the first Pike of the session. I had just netted it when Chrissy and Mouse (her dog) appeared, so we had time to share the moment. At 13 lbs 9 oz, it was yet another step closer to my "twenty doubles" target. They left me to continue their walk, Chrissy saying she'd see me on the way back. I placed the fish in an ET Pike-tube, in order to get some photos when the sun rose higher in the sky. 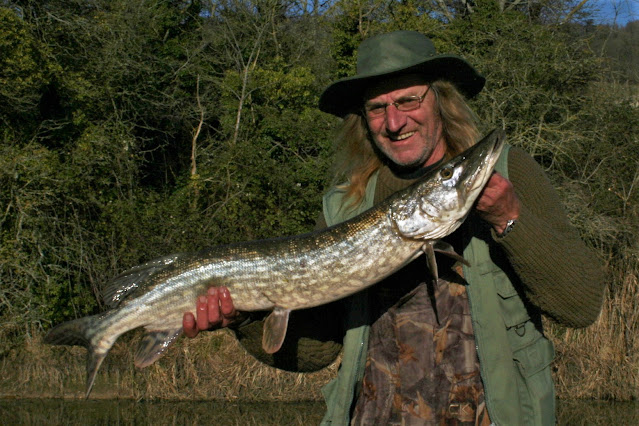 It was 08.25 hrs when my right hand alarm signalled the next bite. Once again I go through the ritual of feeling the line before clicking the bale arm shut and winding down prior to setting the hooks. Bloody hell! I hit it and felt like I was snagged on the bottom? Only thing was that the bottom was steadily moving away from me and, even with the rod hooped over, there was nothing I could do to stop it! Words can never do justice to the adrenaline rush caused by an encounter with a big fish, well certainly not mine. However, as befits the occasion, this Pike put on an impressive display of attitude and power before, finally, allowing me to draw it over the net chord. As I did so, I could see Kevin and Mac (his dog) approaching from the west. The fish was quickly unhooked and weighed before placing it in my retaining sling. It was an absolute gem of a Pike, just a smidge over 21 lbs, thus the heaviest of the current campaign and to say I was chuffed doesn't come close to describing how I felt.

When Kevin reached my swim he said "I hear you've had one!" - obviously been chatting with Chrissy. "No mate" says I "I've had two - and one of them's a proper'un" I proceeded to recall the events of the morning, asking if he'd do the honours with the camera. Being the gentleman, that he is, Kev was only too happy to oblige and we waited until Chrissy had got back before going through the process of getting my trophy shots. It was a magnificent Pike and to be able to share the experience with two people who've become friends, because of a shared enjoyment of this magnificent landscape, just added to the moment. 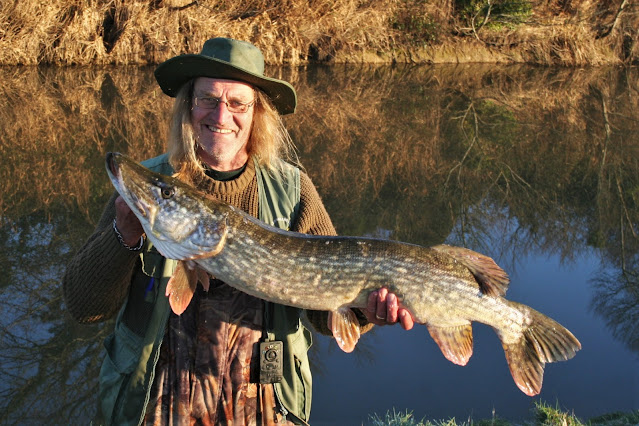 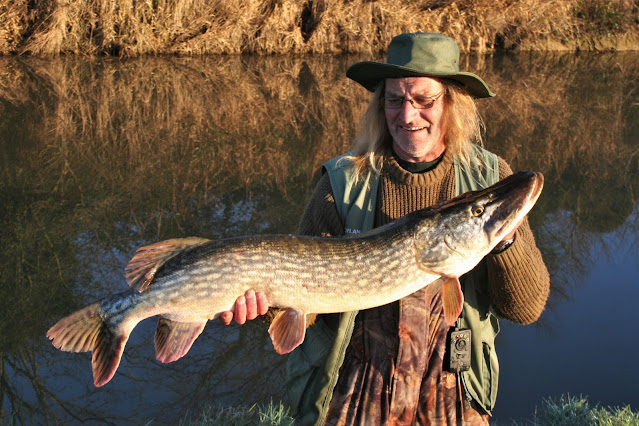 After we said our good-byes, I remained on the bank for another three hours, the only action courtesy of bloody eels. Five times my soft bodied dead baits were savaged by the slimy pests. Did I care?