It's always nice when a plan comes together and the result, you'd hoped for, becomes reality. And so it has proven with my decision to target that snaggy section of the RMC. Only two sessions, thus far this week, but I've already seen my unhooking mat graced by yet another "double". The real icing on the cake will be if I manage to get any action during my afternoon, into dark, session tomorrow?

I've been playing around with my bankside display, not that I'm likely to encounter any other Pike anglers whilst at the RMC. I'm doing it "because I can" I suppose. I've already mentioned that I swapped my rods and reels. It has now gone a step further with my decision to incorporate the £1.66 (Three for a fiver) Dragoncarp "Ultimate Redmire" bite alarms and my brother, Sye's, home made "Back-biters". What needs remembering is that my terminal tackle, bait choices and presentations haven't altered one iota and that's the only bit that the Pike will encounter, until it's too late. The kit on the bank and what it looks like, however, is for the angler, not fish, to worry about. When I end this current project, be it a success or not, I have every intention of posting a "how I do it - warts an' all" Pike fishing the RMC piece. I've been capturing odd images of the tackle, scenery, plus other bits and bobs, with just such a post in mind. 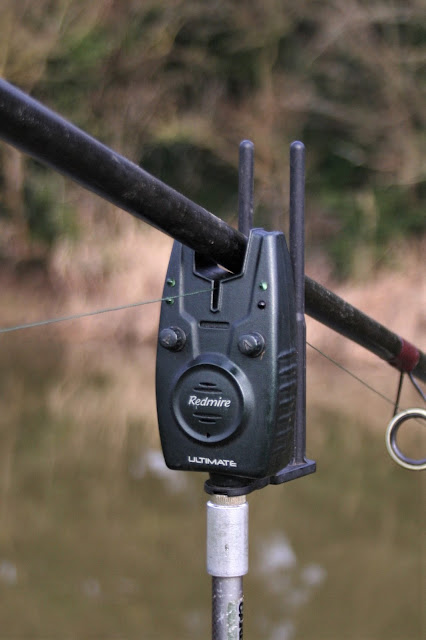