"Effort equals success" is an adage which I've heard used in many situations. It certainly rings true in many spheres beyond angling but, the pursuit of big fish is definitely suited to the sentiment. Today I have finally reaped the rewards for a sustained period of baiting that was a bi-product of a pike session before Storm Darcy unleashed the "Beast from the East II". Way back in early February, I witnessed a spectacle of fish activity, on a small drain, which was sustained and very area specific. Both carp and, far more interestingly, tench were involved and I made plans to give it a bash before the season ended. A quick lead around, after packing up the pike kit, revealed a couple of interesting features. I couldn't wait to get back. Only thing is, I had to, because snow and ice had impacts on fish behaviour which weren't conducive to me casting a bait. Even when the snow had gone, heavy rain followed and the drain systems suffered the double whammy of snow melt and floodwater; I had to bide my time. It was the session when I caught that 14 lbs 14 oz pike when I was to, once again, witness some tench/carp activity in a similar area of the drain and knew it was now, or never, to get a plan together. Prior to today I had managed two short sessions, in the new swim, and had seen much to keep me encouraged yet not managed a bite! If nothing else, once I have a project on the go, I'm a bloody stubborn git. So bait has been going into the swim either before, or after, work which is one of the major benefits of shift work.

If I was up at "silly o'clock" on Tuesday, then today it was "stupid o'clock" because I was parking the van just before 05.00 hrs - two baits in the swim just 45 minutes later. As I've still got one more session planned for Sunday morning, I will hang fire on the details of rigs and bait until after the season finishes. I'd written, yesterday, that all I wanted was just one decent fish before the season ended. At 08.15 hrs the right hand alarm burst into life and, very quickly, I found myself attached to an unseen adversary who had no intentions of seeing my landing net. It was a magnificent battle, worthy of the fish which I eventually subdued. A gnarly, old, Common Carp which tipped the scales at 24 lbs 10 oz! That's a decent fish anywhere, let alone a remote drain on the East Kent marshes. Benno, Sye and Bev were all contacted and given the dribbling highlights by this adrenaline junky. I was out there, all alone, smiling like an imbecile. I stayed on for another ten hours, missing the only other bite. Did it matter, did it f**k! My self take efforts don't do this fish true justice, but they're certainly better than nothing. 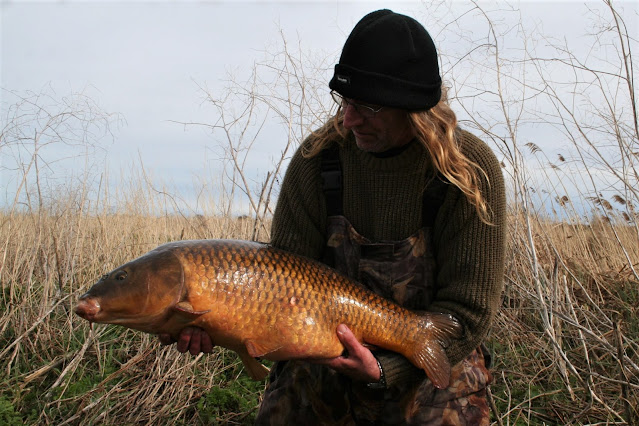 As I'm looking at these images, I'm still buzzing. If ever I stop feeling like this then it's time to pack it in? I know that it won't matter if Sunday produces another fish but, I'm excited at the prospect already! I've already stated that once "close season" kicks in I won't go fishing again until I've retired. As I haven't even handed in my notice, as yet, it will be at least six weeks I reckon. On the plus side, the garden will look a lot better and the BWKm0 list will get a few additions.