Two more additions for the latest "lockdown" list and boy was I close with my prediction of yesterday? Activity around, and under (more about that later), the feeding station was fairly constant with all the regular visitors putting in appearances during the couple of hours I had spare, pre-work. Still one pair of Greenfinches hanging around, this is the male without the BTO ring, and it was a nice surprise to see several Chaffinches drop in to pick up crumbs from the feeders above. It was whilst I was watching a pair, flicking about in the neighbours flowering cherry that I heard that unmistakable call of a Brambling as a small flock of birds passed over the garden. So No. 50 wasn't either of the species I'd thought, but No. 51 certainly was. I was undertaking a bit of "pest control" with my trusty old 1959 Webley Mk III air rifle when I espied a Chiffchaff flycatching from the rear of our garden Elder bush/tree. The Common Buzzards are back on territory over at the farm compound, where a Mistle Thrush was also belting out his song in the still morning air. A group of four Rooks went north, which is right on cue for this time of year and there is a noticeable increase in the Blackbird numbers, around the gardens of Vine Close, although I've made no accurate counts. 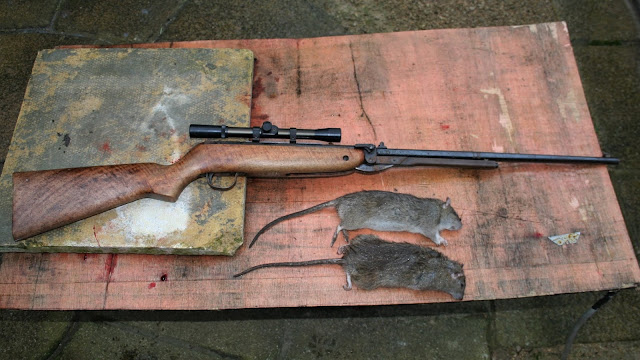 So back to my pest control efforts? I begrudge the seed that is consumed by the hoards of feral Rock Doves that my neighbour, Barbara, actively encourages, but because I am also able to provide food for Collared Doves and Rose-ringed Parakeets, put up with their presence. Brown Rats, on the other hand, are totally unwanted visitors and I do my utmost to ensure they don't become accustomed to the hospitality afforded other wild guests. I've shot twenty-seven during the last ten days and, before anybody gets on their high horse, it's because I think shooting is far more humane than indiscriminate use of rodenticide poisons. Still want to make a fuss? My simple answer is PSL - lets kill something to tick another box!