Another walk in KG VI park

My slumber was brought to a juddering end when, at 05.00hrs, the alarm sounded for the start of yet another Monday early shift. Up and showered, a quick cuppa and I'm on my way; well almost! I hadn't gone 5 yards when I was confronted by the sight of a flat rear tyre on our motor. Bev needs it for work and we have to ferry the grandchildren later in the day - I'll have to do something!!!
I go back indoors to tell Bev the good news before restarting my walk across Newland's Farm to work. In the dark, the constant calls of Song Thrushes suggested that there was quite a decent movement going on, I even flushed a few decked birds from the cauliflowers, as I passed.
I had a word with my supervisor and a plan was agreed, "We'll sort it out tomorrow" being his parting shot as I headed back home little more than 90 minutes after I'd arrived. It was now light and the Song Thrush passage had reduced to odd singles moving NW along with a few Meadow Pipits and a flurry of Swallows. The offending wheel was taken off the car and replaced by an "Emergency" spare. Quite what Ford were thinking when they placed a pram wheel in the boot - it is barely wider than a Mountain Bike tyre!
08.30hrs and I'm at Kwik-Fit; who were very helpful, promising to have the tyre fixed, or replaced, by 15.00hrs (when I said I could get back to pick it up). A few chores to be undertaken before I was able to get back to King George VI Park for another session looking for a Yellow-browed Warbler. I got off to a decent start, with a group of 5 Firecrests in the immediate area of the Gatehouse. A few Chiffchaffs were scattered around and, un-surprisingly, a number of Song Thrushes were seen. A Grey Wagtail flew south along the cliff-top and several bunches of Chaffinches were also noted as they moved steadily overhead. With two circuits of the park completed, I was beginning to think that the hunt was over. A Firecrest teased me with a hide and seek show, but finally allowing a few token shots before it flitted back into the shadowy depths of the tangled vegetation.
Somewhere, from behind me, came the un-mistakable call of a Yellow-browed. Game on! Making my way over to where I thought the call had originated, the bird called twice more, slightly to the right. It was favouring the same group of trees that the "Blue-tail" had used. In amongst a sizable flock of Blue and Great Tits, I had a few tantalising glimpses as it fed high up in the canopy of a large Beech. They moved off and the bird was lost - until it called again? I had followed them along the park boundary when it called again from behind me. I must have walked right underneath it. Another 10, or so, minutes elapsed before I relocated the bird and managed to grab a series of pathetic record shots as I pointed the lens into the sunlit canopy. 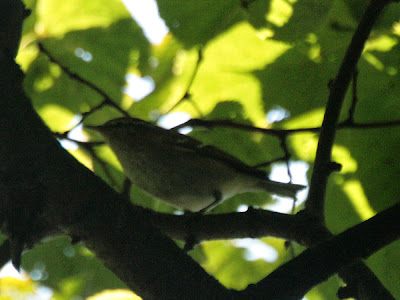 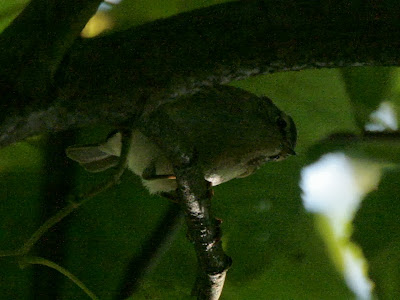 I did enjoy some fantastic views through my bins, so a successful outcome to my search. As I was watching one bird, a second called from where I'd just been - so at least two Yellow-broweds in the park today. Quite what else was waiting to discovered will remain forever a mystery; two sickly grand-children being in need of our attention - Bev and I on duty, via Kwik-Fit and a bill for £74.50!
Posted by Dylan Wrathall at 19:15