A worm at one end - a fool on the other?

My title is the classic perception of the general publics' view of anglers - silly men (very rarely; women), sitting on boxes, dangling a maggot in the water. Obviously, as an angler, I am slightly insulted, but fully understand that this opinion is borne of encounters with fishermen at local parks, rivers and canals. However, what I'm even more confused by, is angling's problem with the public inability to see anglers as conservationists; bloody right - I can't see anglers as conservationists and I'm one of them!
Don't get this mixed up; I know many anglers who are wonderful naturalists, able to enjoy the various wildlife that they encounter whilst engaged in their hobby - good all rounders, but absolutely no active contribution to conservation. The loss of the "close season" of the coarse angler, the lucrative business of year-round fisheries has, for me, shown the industry is "dollar driven". The chance of  habitat regeneration (March 15th - June 15th) has been replaced by the commercial fisheries willingness to allow anglers to fish whatever the cost to the environment. The demand of  anglers being as important as the fishery owners providing access - supply and demand (Welcome to the legacy of Maggie Thatcher and that idiot Tony Blah,blah,blur) How is this conservation?
Like-wise, I have been bombarded by the anti-otter campaigning of celebrity anglers - get real? Anti-otter? A native British mammal which, due to habitat degradation, has suffered a massive range reduction but is now in the same position as the Common Buzzard - repopulating areas from which it was lost in times gone by. I have got a real problem with this mind-set; yet do know where the problem originates - stupidly arrogant anglers, those (of my era) who took it upon themselves to illegally introduce barbel into rivers across the UK.

A look at the rise and fall of Adam's Mill is a micro-insight into the bigger picture. I have no sympathy with the guys who blame otters for their inability to catch fish. Otters belong in our rivers - barbel don't - well certainly not the 82 that are host to the species at present. Let's think about this situation? Otters love to eat eels, a species which have suffered a massive decline due to the pressures of modern water management techniques and the "solution to pollution being dilution!" mentality of the water companies. The massive spread of barbel has negated the demise of  the eel, to such an extent, that the preferred prey has become the newly introduced alien.
I love my fishing, I have enjoyed my recent run of barbel captures, but cannot allow the presence of an alien fish be a reason for attempting to stop the recolonisation of the R.Stour by a native mammal. If the cost of this is the reduction in the barbel population, so be it!
The actions of meddling anglers is mirrored by the crazy decisions of River Authorities (predecessors of the Environment Agency) which saw the introduction of Zander into the Great Ouse system. Wels Catfish, Zander, Barbel, Carp and many other exotics have given UK anglers so much more to fish for, thus sport. If the provision of these populations has provided the native wildlife a chance to regain a foothold in areas that they have been lost, maybe anglers are conservationists after all? 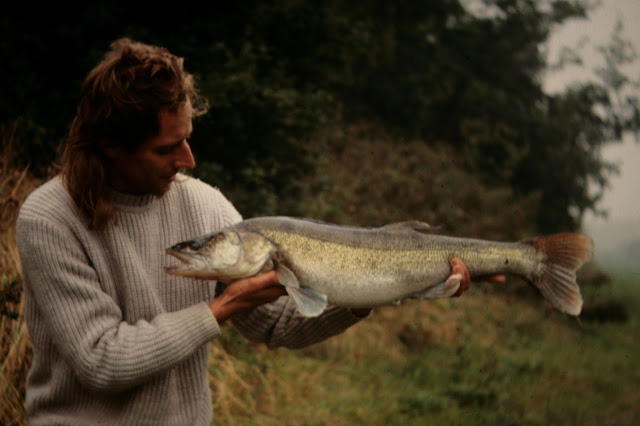 My accompanying photos are of my years (1983 - 1986) spent on the Fenland drains; Zander fishing is a direct result of Water Authority arrogance in their introduction of these fish into the Great Ouse river system. Anglers have ensured that the spread of this species hasn't been restricted to the Great Ouse catchment - The Severn, Thames and Trent are all host to these fish - who knows where else?
Posted by Dylan Wrathall at 16:05