It was in mid 1979 that I joined the Kodak D-SR (Distribution Southern Region) gang in the massive warehouse complex at Swallowdale Lane, Hemel Hempstead. Five years of absolute mayhem followed, as it was the era before PC and Health & Safety rules came to dominate factory life. A warehouse full of young lads, a recipe for anarchy and so it proved. We had an absolute scream within the confines of the warehouse, with a social scene which went far beyond the Kodak Sports & Social Club and facilities which the company so generously provided. We played football together, we drank and partied whenever the opportunity arose, it was quite simply the best period of my life up to this point. Our manager was a spineless, posh, goon by the name of Don Kay , thus immediately referred to as Donkey by the lads. Alan Berry was the D-SR senior supervisor and far more in tune with the vibe of the guys than "Donkey" could ever have hoped for. 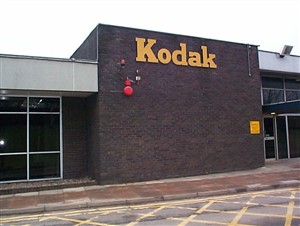 Alan Berry was huge character with a man management skill base that very few others, I've ever crossed paths, possess.  A phone call, on a land line, at 04.30 hrs one Saturday morning in late November/early December 1980 (1?) and I hear "Dylan, get your arse up here now! Boots are calling!!" Turned out that Kodak had released an instant imaging system based upon the "Polaroid" technology. Polaroid subsequently took Kodak to court, in the USA, winning the case only for Kodak to pay the fine then purchase the entire Polaroid business, thus also the patents associated with this type of photography. I digress, Boots had advertised that these Kodak products were available in their stores via some huge ITV campaign. They weren't, they were actually still on pallets in our warehouse and Alan needed to rouse the troops to come to assist the cause. Boots main warehouse was at Island Street in Nottingham (if memory serves me correctly?) The gang assembled and loaded all the Kodak "trunkers" well before 08.00 hrs, thus ensuring the products were now Boots problem, not Kodak's? Job done, so early, Alan then pulled off a masterstroke. He got Monday's picking sheets printed off and we, as a gang, absolutely smashed the orders for the next working day before packing it in around 11.00 hrs. We were all told to go home, get the family, be that the missus and/or kids, and get back to the Crabtree PH, Adeyfield, Hemel Hempstead where Kodak footed the bill for the entire gathering. A stroke of genius, Alan then ensured we were further "on side" by agreeing that O/T would be payed for the Monday, despite the fact that we'd already completed the majority of the day's order picking. My Kodak experience certainly impacted upon my life in a very positive manner, although I walked away for very selfish reasons.

So why have I decided to revisit this period? Well, if ever I felt that I had gained an insight into a subject beyond that of my angling peers, then fish photography was it! In 2021, getting a decent record shot of any capture is a breeze, such is the power of digital technology. Back in the early/mid 1980's I was serving as R/O for the Chiltern Region before joining the Executive Committee of NASA (National Association of Specialist Anglers) and was able use my Kodak employment as a way of allowing me to share technological experience of this medium. The use of either print, or slide, photography was all we had. That the floors of the building, directly above the D-SR warehouse, contained the Kodak photographic technical team, was a God send. I spent many hours in their company, seeking advice, when I should have been order picking or operating a fork lift! "Specialist Angler" was the NASA members bi-annual(?) publication and it was within the pages of this splendid magazine that I found a platform to share my photographic thoughts with fellow anglers. Originally, I'd offered Kodak a suggestion that they targeted angling with their products. Obviously modern specimen hunting was all about catch and release angling, thus the trophy shot being a vital part of the process. The Kodak slogan of the time was "Keep it with Kodak" I'd offered a slight twist with my suggestion of "Keep 'em with Kodak" - Unsurprisingly, rejected by the business hierarchy due to contractual issues. What it did allow, however, was for me to get involved in producing a magazine feature in which Kodak took publishing credit, yet I earned a huge (£1,000 +) fee. That was at least ten weeks wages back then! For sure, there were a few of my photos that Kodak took copyright control of, I'd get over it. On the back of this single article, I embarked upon a series of "slide shows" which took me from Newcastle to Somerset, and many destinations in between, where I was able to share my experiences and offer practical advice to fellow specimen hunters.

Alas, the Kodak brand is now but a memory. The American parent company completely unwilling to embrace the advent of digital imaging and, as a result, the business collapsed in spectacular fashion. Fortunately, I'd already parted company and was firmly established within the Unilever empire, thus not at all affected by this colossal misjudgement. As a member of The Upper Gade Specimen Group, our motley crew might not have been  the most successful anglers of the period, yet our photo display boards were the envy of many due to the Kodak link. Therefore I remain eternally grateful for the time spent within the organisation, the skill-set I was taught and able to share with so many other anglers of the period.