I am delighted to report that the "split cane caper" is up and running. I spent an eye watering session on the banks of the RMC, this morning, temperatures never getting above 2C and combined with a brisk WNW wind, all the time I was there. Just one bite but, enough to start with, it resulted in a Pike on the unhooking mat. At 14 lbs 6 oz I'm certainly not about to start moaning, especially after the run of blanks I've recently endured. The best thing, for me, was the fact that the Mk IV coped perfectly well with the situation. Absolutely no issues with setting the hooks or playing the fish. What made it even better was the fact that the loaded drop arm and Siren R3 combination did exactly what I'd hoped. I got a single bleep, as the fish picked up my bait, thus was already moving towards the rod when the line pulled from the clip and it was game on. The pike was hooked perfectly in the scissors, there's not much more I need to say. It's a good feeling when a plan comes to fruition and you get the result that was hoped for. 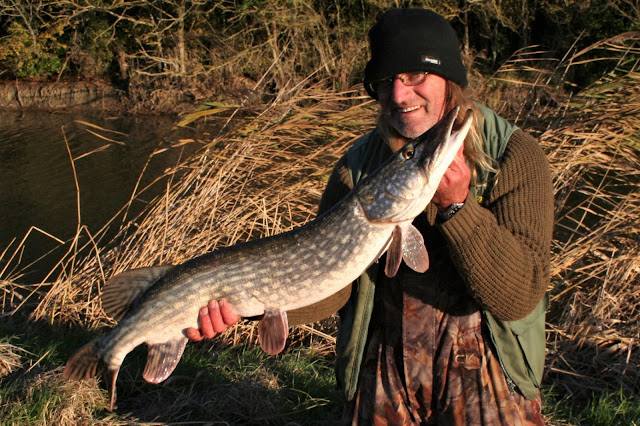 Once again I am indebted to one of the regular dog walkers, for taking these trophy shots. I should really make the effort to put a name to these guys & gals as they play such a significant role in my enjoyment of being on the banks of the RMC. I will also make an effort to get some images of the rods, reels and assorted debris, which I call essential, just to give an idea as to what this folly is all about.