I'll be the first to admit that concentration is not high on my behavioural traits table, if there is such a thing? So many other things happen in the world which distract me from what I genuinely set out to achieve. The RMC pike fishing is no different from any project I've undertaken, thus, no surprises that the split canes, then The Stour, managed to enter the fray. We're now half way through December and, after chatting with a couple of friends, I realise that my original plans are suffering due to a lack of commitment, on my part. To be fair it was a reality slap, that was much needed, and I've decided on a course of action which I intend to stick to - Covid rules allowing?

The Stour is a magnificent venue, especially the tidal reaches, and I'm intending to join C&DAA next season to ensure that I've access to much more of the river. There's a Barbel/Chub gig which needs planning, with the assistance of Benno & Luke, plus that "river twenty" which could provide a real challenge next pike season? However, there's an awful lot more angling to be done before then and I must get back into the mind-set of my RMC Pike project. Looking at my results, thus far, I'm not too far off achieving my goals in two of the categories, however, one hundred Pike in a season is way off the mark. It might be possible, weather and water conditions allowing, to get another six sessions in before the New Year? If I do manage this, my perception of how things are going could alter significantly. All of my sessions, thus far, have given me the chance to "learn" the canal and if I'm to use this to my advantage it's time to stop my exploring and concentrate on those areas where I've been fortunate to capture some very nice Pike.

There are still a few tweaks, in the locker, just in case I need to up the ante? Basically, I'm very confident in my rigs and bait presentation. Bite detection is as sensitive as I can make it without incorporating a float, which is never going to happen given my attention span! Bait is the best that I can acquire, then boosted with fish oils and colour, before being presented to the fish, popped-up, suspended or flat on the bottom. All I can say is that whatever I'm offering won't be anywhere close to what those "lazy, weekend anglers" cast into the RMC straight out of the packet. That is not a slur on the guys who go about their angling in a very responsible manner but, instead, a snipe at the "sheep" who can't walk further than the first few swims from the car park, yet incapable of taking home the rubbish they create whilst on the bank. A beer can, dead bait packet, luncheon meat/sweetcorn tin weigh an awful lot less, once empty, so why leave it(them) behind? Shit for brains and an embarrassing advertisement for angling when viewed from the perspective of other visitors to this historic waterway.

I've blogged many times, over the years, about the role Pike fishing plays in my annual cycle. Obviously, there was a huge gap when Kent birding took centre stage, but the allure of our "apex predator" has been central to more years of my adult life, than it hasn't. That I'm now in a position to expend more effort in my quest, due to the removal of work commitments, should mean that any challenge will require little more than just turning up and going through the ritual. Of course this is a glib simplification of the situation. I've already agreed with Bev that three sessions a week will be the norm, although not tablets of stone. Weekend fishing is to be avoided, wherever possible, due to not wanting to compete with other anglers for both swims and fish. Talk to a "carp faggot" then a session equates to a camping trip, for me it is usually fours hours with my baits in the water. Therefore, if I manage three sessions a week, I'm only fishing for twelve, or so, hours! Of course it might be a little longer if the Pike are playing ball but, even if they are, six hours per visit would be the limit, odd social sessions excepted. 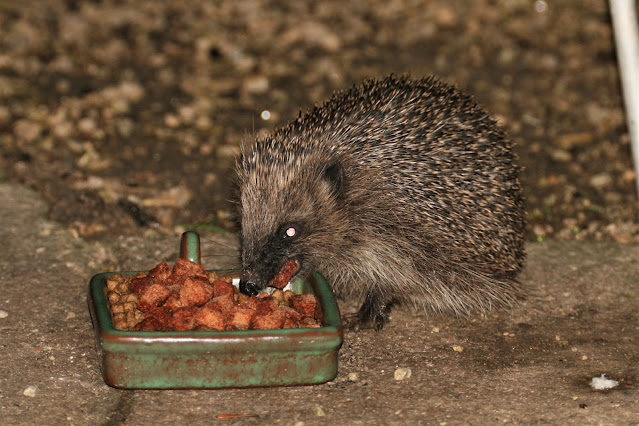 Other bits that might be of interest, depending upon how closely you follow this nonsense. I ran the moth trap on the night of 14th/15th and was rewarded by the presence of four Light Brown Apple Moths! It's now back in the shed where it will remain until a good few weeks into 2022! The hedgehog feeding station remains a focal part of the Dumpton garden, with sightings on a nightly basis, although Storms Arwen & Barra certainly impacted upon the activity. Having spent the weekend away, I wasn't particularly surprised that there were no visitors whilst I was sat in my study on Tuesday & Wednesday. However, tonight (Thursday) at 19.00 hrs a beautiful little "hoglet" appeared at the bowl and allowed me the opportunity to rattle off a few shots. I consider it an absolute privilege to witness such activity in our garden. Pike fishing in the morning - everything in the garden is rosy?