I caught my first, ever, carp from Pixie's Mere (Herts) during a night session after tench - a battery powered bike lamp illuminating my float under which a lump of bread flake was gently resting upon the silty bottom. This was pre - 1973, as I was still at school and had yet to acquire my first "Heron" bite alarm. The fish in question was a small common of two or three pounds and easily subdued by my, glass fibre, 13' Milbro "Enterprise" match rod and Intrepid "Black Prince" reel. The line would probably have been Bayer "Perlon" and the hook, all shiny and silver, from Woolworth's? At the time I remember being thrilled by the capture - carp, after all, were impossible fish to target, such was the powerful myth surrounding the species during this period of my angling journey.
It was. however, a decade later before I captured my first "double" - 9th March 1983! By this time I was employed by Kodak Ltd and had access to one of their social club fisheries, at Water End, just beyond the Hemel catchment, along the road to Lieghton Buzzard and Dagnall. It weighed in at an incredible 11 lbs 4 oz and I was over the moon! My diary reads "Hair rig - size 6 Au lion D'or hook, 8 lbs b.s. Sylcast bronze line with a Rod Hutchinson "Mingle Fruit" boily and using my glass fibre Gerry Savage S/U (stepped up!) 10' carp rod - strangely I haven't recorded the reel model. Although looking at the photos I feel sure that it would have been a Shimano EX 3000 - Leslie's of Luton being the first retail outlet to offer these new, fandango, items. They were a direct competitor for the ABU Cardinal range, not the revolutionary bait-runners that were to follow.

Don't be too surprised by all this technical stuff - by this time I was already a member of The Tring Syndicate and captor of many tench in excess of 7 lbs! I was mainstream "speccy hunting"; rubbing shoulders with some of the finest specimen anglers of the era. My journey into carp angling very much a direct consequence of a lengthy angling apprenticeship which incorporated many aspects of watercraft and bank-side etiquette that have long since been forgotten. I was a tench angler, fascinated by the allure of these magnificent fish, smitten with the mighty specimens that inhabited the vastness of Wilstone Reservoir (It's little more than a piss hole in the snow in reality - my re-assessment some 35 years on!) Amongst the other syndicate members was a guy called Lester Strudwick (a founder member of the Carpike Specimen Group) and it was he who told me of the potential of the municipal lake at Stanborough, Welwyn Garden City. 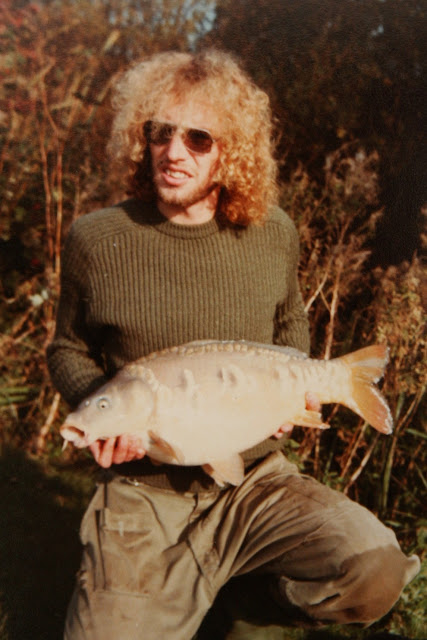 I spent one entire winter period there (1983 - 4) taking good numbers of decent carp to a PB of 23 lbs 14 oz - a figure which remains unbeaten to this day! Although I did catch a fair number of carp, after this date, as birding became an influence, I lost my way, and quit angling entirely by August 1993, so need to fast forward to May 2011 before anything significant occurs.
We're back from Scotland - my first outing with the rods since 1993! Benno introduces me to Long Shaw Farm and the delights of surface fished bait for the spirited "lean commons" which inhabit the venue. It was the spark which lit the blue touch paper - once again I became an angler - birds, moths and associated subjects becoming, very much, peripheral interests.

This time round, however, the angling was to be done on my terms. There was absolutely no way I was going to return to the full-on lunacy of big fish chasing that had been such a feature of my previous incarnation. I wanted to enjoy myself, catch a few fish and use tackle which assisted my cause; it having been stored in my loft for the entire eighteen year lapse. The local commercial carp fisheries are able to provide magnificent sport and the simple enjoyment I was after - everyone's a winner?
Once the novelty of my return, to angling, had worn off - I was, again, itching to target some better fish than those ravenous hoards of  the commercial carp emporiums. Pike, barbel, perch and eels have all been subjected to my attentions - very successfully, before I've focused, once again, on carp angling. There has been a very strange series of events that have combined to get me to this juncture. If it were not for that original campaign, after a twenty pound pike, over the winter of 2011/12, I'd probably be none the wiser? To have discovered that the marshland drainage dykes, of East Kent, held fish of this calibre was a revelation and pivotal to the majority of my angling challenges since (barbel and perch excepted)

It was whilst I was pike angling that I was made aware of the quality tench that these small drains contained. It was with this knowledge, at the forefront of my thinking, that I made a last minute change of plans - I'd originally been going barbel fishing on The Stour, in Canterbury, but had changed my mind after learning of some EA weed cutting and the resultant carnage along the chosen stretch. My first tench session resulted in a single bite - from an 18 lbs 2 oz common carp! Back again, just a few days later and my luck continued with a brace of carp visiting my landing net. One was a 12 lbs+ fully scaled mirror; the other a magnificent wild common of 20 lbs 10 oz - both falling to chick peas, the twenty being my first such fish in thirty - one years!

And so we are right up to date - the 2016/17 season and where I'm at now? Not much has changed in my expectations, but there is one major new factor involved in this whole caper - I'm now using split cane Mk IV rods, as designed by Dick Walker and manufactured by B. James & Son, London in 1957! I had one purchased for me, by my family to celebrate my 60th birthday - I got a second just to ensure I was able to "look the part" should I find myself in carp angling territory. When I'd stopped dribbling, I promised my family that I would catch a "thirty" on their rod - it is now my single most important challenge as I see it.  A thirty is not such a big fish in 2016, but it is, yet I've set my sights on a wild fish from the East Kent drains or a remote stretch of the RMC. Either which way I want it to be a wild fish with no documented history, of capture, and the resultant name. There are many hundreds of miles of these dykes spread over the Ash Levels and surrounding marshes - surely my time will come?