I've just been looking back over my recent posts and, there can be no denying the fact that pike fishing has taken centre stage. Be fair, the blog is called "Of Esox" so the clue's in the title choice before anyone starts moaning. However, the "& observations" part has been conspicuous by its' absence, so I will attempt to rectify the situation with this offering. Today was my final day off before Christmas, a holiday day which was "use it or lose it" - thankfully I've been allowed to transfer five days over to next year's entitlement, so will have no problems, holiday wise, in 2021 as I now have thirty-two days in the bank!

I couldn't go pike fishing today as I'd promised Bev that we'd get those chores out of the way that can no longer put off as we, rapidly, approach Christmas. Some finishing touches to the decorations, pratting about with furniture and bedding, and, most importantly, a complete tidy-up of my study. As I'm sat here now, typing this latest episode of Dylan's drivel, I can happily report that all the tasks have been successfully completed and "everything in the garden is rosy!" It must be stated that the study clean up was the most arduous of all the chores, involving multiple trips to the bins in order to "declutter" the space which I call my own. To do this trip involves little more than a walk out of the back door, via the patio, to the bins situated just beyond the garden gate - a journey of 5 or 6 metres! No big deal but it does mean that I was, regularly, outside and able to see what was about. An immature male Kestrel was regularly perching in a large, leafless, tree a few gardens to the north and allowed a nice photo opportunity when it posed on the roof of the neighbouring bungalow. The BWKm0 total, for lockdown Mk II, now stands at 37 species with Stock Dove and Meadow Pipit the latest additions.

The only other news, worthy of note, is that we're are still having hedgehogs at the feeding station on a nightly basis. Obviously, nowhere near as hectic as in the warmer months, but a December sighting wasn't something I'd expected. Now whilst you might be expecting another hedgehog at the feeding bowl photo I'm going to share an image that I captured yesterday, whilst down on the Royal Military Canal. 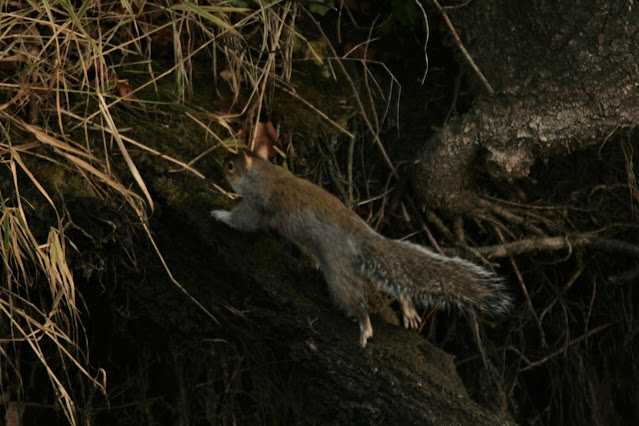 Two weeks until Christmas, three to the start of 2021, can't see too much changing?