Up early, with no plans to go fishing this weekend, I knew that there were some jobs which Bev and I wanted doing, so had agreed that today would see us get them out of the way. As it happens, we did all that we wanted, and more, without too much fuss and job's a good'n! So first thing this morning after the ritual coffee making, I was outside on the patio tidying up the hedgehog feeding station (click here if you wish to see more) immediately aware that there were Song Thrushes moving overhead. By the time I'd fed the aviary and topped up the garden feeders I'd already counted 30+ birds moving in a southerly direction. Time to grab the binos and see what else was happening. The skies were dark and menacing, rain was constantly threatening but the birds were on the move. I couldn't stand outside all day, as I've already explained, but I tried to make the most of the situation. I ended the day recording 170+ Song Thrush moving S through to WSW, 40 Chaffinch W, 11 Siskin E, 1 Rook S, 3 Cormorant 2N/1E, 1 Swallow N and topped it off with a Short-eared Owl WSW at 09.59 hrs. Birds around the garden were 135+ House Sparrow, 17 Collared Dove, 375+ Feral Rock Doves feeding on stubble beyond the garden hedge and a tantalisingly brief Lesser Whitethroat showing features of an Eastern origin? The local Sparrowhawks were incredibly active around the area, I have no idea how many individuals were involved, but recorded them on seventeen occasions during the time outdoors. 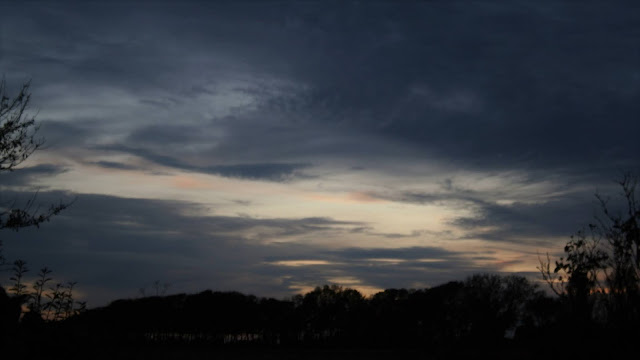 As dusk approached, the skies started to darken and more heavy cloud built along the western horizon, I rattled off a few shots towards the south, where there was still a few gaps in the cloud. Could tonight be the one when I record my first Redwing of the autumn  - naked noc migging! I'll have the study door wide open, awaiting the nightly visits from my spiny mates.