I find it absolutely incredible to acknowledge it was fifty years ago, this month, when I caught my first pike. I'd already been using a rod and line for seven years before this momentous event, yet it is that one capture which has steered my angling ever since. Of course I recognise that between 1993 & 2011 Kent birding was to dominate my leisure time and for that experience I remain truly grateful to all those who were part of this obsessive period of my adventure. However, there can be no escaping the fact that angling and, more accurately, specimen hunting has played a major role in my pathway through life, thus leading me to the here and now. I finished a previous post with mention of how angling allows me to maintain a grasp of normality during these troubled Covid-19 times. Obsession can never be healthy, yet a connection with the natural world, in whatever guise it takes, has to be good for the soul? With my recent blogging being very much pike orientated, I thought I might have a look back at the journey which has been my privilege to travel over the passed half century. My apologies to those who've already seen some of these old photos and heard the tales in earlier posts but, looking back is a great way of moving forward, if that makes any sense? So as I'm on a pike angling roll, let's see where this post leads? 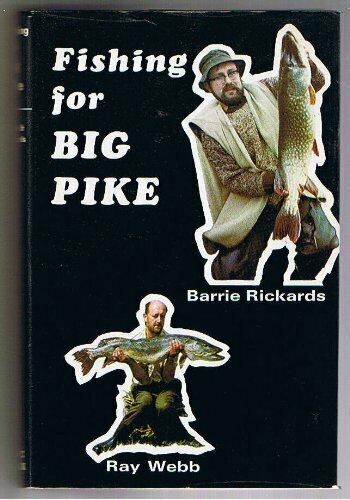 It is probably worth mentioning that, prior to the recent "mini pike project", bedtime reading has been my 1st edition copy of "Fishing for Big Pike" by Barrie Rickards & Ray Webb. (A & C Black 1971) Within the pages of this single book are the finest words of advice on pike angling, location and thinking ever published, as relevant today as when first written. I should also mention that Martin Gay's chapter in the 1979 "The Big Fish Scene" contains much timeless advice about the finer aspects of pike location and behaviour. Don't get me wrong, there have been huge advances in angling techniques for all freshwater species, over the intervening years, yet pike are still the same, pre-historic, fish they've always been. Those very basic lessons, conveyed by Rickards, Webb and Gay remain the building blocks from which modern pike fishing has evolved. If you get the basics right, any fine tuning will do nothing but add to your chances of success.

I'd love to be able to say that because of adherence to such worldly advice my pike angling became a thing of beauty and finesse, but I'd be lying!!! It was eleven years after my first capture that I eventually landed my first "double" - it was a bloody twenty! An absolutely wondrous quirk of fate, yet probably the worst thing which could have happened? I thought I knew it all and took heed of none of the wisdom on offer as a consequence. The arrogance of youth is a very familiar situation to that which so many other of my peers will have experienced. What didn't help the situation was the fact that I continued to catch more decent pike after that fateful event, thus furthering my belief that I was good at it. What a major misconception? I'd like to think that Lester Strudwick (God rest his soul) played a part, as it was he who pointed me in the direction of the Scottish Lochs, yet know crossing paths (swords) with Eddie Turner, Bill Hancock and Vic Gibson (the original ET crew) was the turning point in my pike angling adventure. Tring in the mid-80's; Wilstone Res. was my second home. Eddie and co were on Startops End Res. perfecting their vane float techniques prior to unleashing the merchandise on an unsuspecting, pike angling, public. Eddie was the brains, Vic the gentleman, Bill the front man, and mouthpiece, for this revolutionary gang. We hit it off immediately and, as a result, my understanding of pike fishing "edges" became a part of my tactics and technique.

If I'd been doing OK before, now my returns went into melt-down. What Eddie taught me was to look for an edge, something away from the norm which is too much trouble for the other guy. He highlighted the value of buoyancy, colour and flavour in my dead baiting approach. I have to make mention that because of a very personal opinion, live baiting was no longer an option in my pike angling armoury at this stage. "Don't ignore the margins" is the one lesson, above all others, which has stuck with me since those crazy times and stood me in good stead over the intervening years.

So here I am in October 2020, once again seeking to capture a wild pike in excess of twenty pounds. Having achieved this target on many occasions, in the past, what makes this challenge any different? If I'm honest? I don't really know! Somewhere in my being is the desire to recreate an image from my past. A photo of me, posing with a twenty pound pike, that manages to recapture all of those old memories which have paved the the way to where I now find myself. Important that I succeed - not in the slightest. Enjoyable if I do - without a doubt!