I'm sat in my study watching the brutal force of Storm Ciara battering the Newlands Farm area beyond our boundary hedgerow. Two garden fence posts have already surrendered to the onslaught and, I fear, more will succumb before the 65/70 mph winds blow themselves out. The wheelie bins are laying on their sides and the summer house is crammed with our wicker garden furniture, which was placed in there yesterday evening in preparation for the arrival of this natural phenomenon. This increasingly regular extreme weather having nothing to do with climate change you understand. If you require an explanation to this situation just ask that fake tanned moron Donald Trump or the equally deluded Scott Morrison - it's all another manifestation of fake news? It really is becoming a case of the lunatics running the asylum or the blind leading the sighted. I'll end it here, choosing, instead, to place my faith in a spoilt brat, swanning around the globe on multi-million pound, but eco-friendly yachts, preaching her version of the climate gospel to the rich and powerful. Sadly there's only one winner and they won't come from Sweden! The only time anything will change is when there is opportunity for money to be made, until then it's just good PR and cheap talk. What a cynical old git I've become.
It seems crazy that less than twenty-four hours ago the scene was so much more Spring-like, with clear blue skies and a beaming sun. To top it off a Common Buzzard came spiralling over, scattering the Black-headed Gulls that were following the harrow on the big field to the north. Not my greatest photo but species number fourteen, for the challenge, all the same. I'm confident of many more chances to improve on this effort during the coming months. 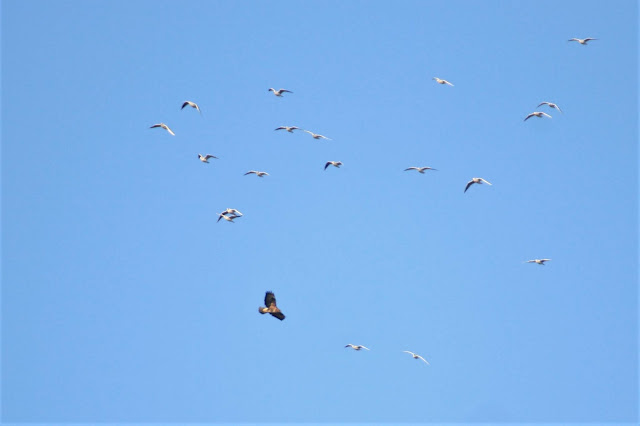 With dusk fast approaching, I took a walk up to the local shop for a couple of cans of San Miguel, purely medicinal I'm sure you'll appreciate? On my way I bumped into one of my neighbours, out walking their dog, who commented on the full moon that was just visible between the bungalow rooftops. It was too good an opportunity to pass by, so on returning home, beer securely stashed in my bait fridge, I went out into the back garden, camera kit and tripod in hand, to attempt my first serious photography of this monthly event. I used a Sigma 1.4 x converter, in addition to the 150-500 mm Sigma lens and probably shouldn't have bothered? The images are the best I ever managed, yet lack that sharpness of focus which I might have achieved without the additional magnification? It's all part of the learning process and I'm perfectly happy to use the experience to ring the changes the next time I'm pointing the long lens in that direction. 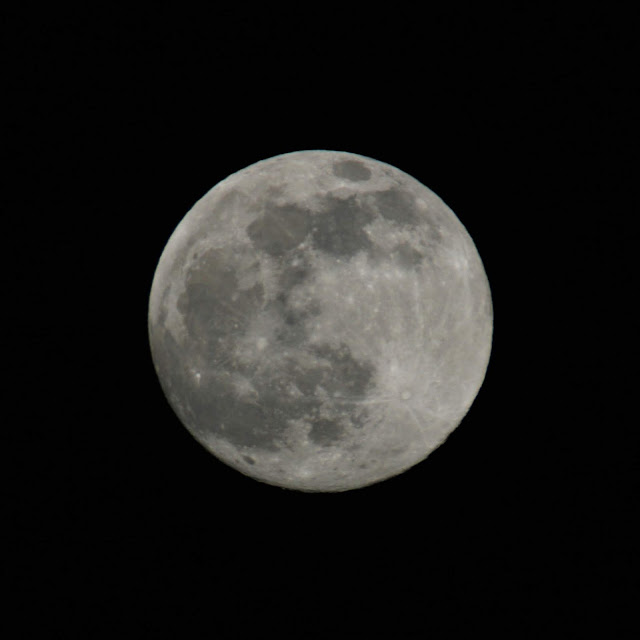