As the health of Bev's mum continues to dominate our lives, I needed to book an emergency day off work. Fortunately, given my employer, it was no big deal and the arrangements were swiftly put in place. So whilst Bev awaited the arrival of the latest Doctor, it was my task to collect Harry from school as he is staying with us, overnight, as his own mum is away on a course; in Southampton?
Having picked him up I told him that we would be going on an adventure, not straight round nanny's, because of the doctor's visit. What I also told him was that because Emily always got treats/chocolate when out with grand-dad it would be his turn today. Under no circumstances did Harry forget that promise and I was constantly reminded of this undertaking all the while we were out. 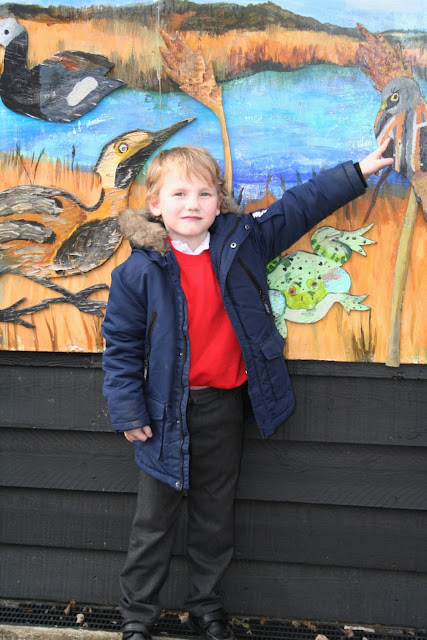 Back down to Stodmarsh NNR for a wander along to the Tower Hide, via the nature trail walk, just the right sort of distance to keep him occupied before boredom became an issue. Worked an absolute treat, we had a great time, with Harry asking several questions about the reserve which took some answering.

The morning had been spent surveying the aftermath of Storm Ciara and, although still windy, collecting up the debris that had been deposited by the gales. My neighbour has a fence panel to replace, we have two posts which snapped like carrots, below ground level, to get sorted. The guys involved with fencing must be rubbing their hands together - how much? The feeding station suffered very little damage, just a broken fitting on the largest sunflower heart feeder - which was easily repaired with some heavy duty wire. Today saw a steady stream of visitors, probably making up for the lack of feeding time yesterday? Ever since the RSPB Big Garden Birdwatch, I have continued to feed dried meal worms in addition to the fat balls and seeds that have always been provided. All that is required is a nominal twenty minute soak in water prior to placing them into the feeding tray. I tend to soak them overnight, thus allowing me to refill all the feeders at one visit. I was very pleasantly surprised when my B&M mission, to get more sunflower hearts, revealed that this same outlet was selling dried meal worms at a very low price in comparison to what I'd been paying previously. £1/75 gm seems a right deal when compared to my alternative provider?

One more photo to add to the garden challenge when a Magpie decided to fly over whilst I was looking for whatever had spooked the gulls. Never did see anything, but their reaction had all the hallmarks of a passing Buzzard.