Luke was thirty, earlier this week, and it was his idea to have a social session to celebrate this momentous event. Little could he have known just how it would pan out. We arrived at the chosen venue, one that I've never previously seen, and were fishing before 07.00 hrs. Benno, Luke, Skunk (he doesn't smell - it's due to bad habits, of his youth, that he's obtained this particular pseudonym) and I traveled down in convoy, Tom and Rob meeting up with us there.
Benno's bait couldn't have settled on the bottom when his back-biter sounded. False alarm? He re-set the indicator and had just sat back down when the same rod was away, this time no messing; line trickling from the spool at a steady rate. As soon as he hit it, it was apparent that it was no jack. The battle was a decent scrap, but steady pressure from his 1.5 lbs t/c barbel rods soon took its' toll and a nice fish was dragged over the rim of the waiting net; yours truly on the other end. We all knew it was a good fish; just how good was revealed by the trusty Ruben Heatons - 22 lbs 8 oz! A new PB and his first English twenty. He was ready to pack up, there and then, and go on the piss! I taught him well? However, it was Luke's gig and we remained at the water. Luke soon enjoying some action when first he landed an 11 lbs 4 oz pike quickly followed by a fine specimen of 16 lbs 9 oz - happy birthday! It was then Skunk's turn to bend a rod, a scraper double, possibly? He didn't weigh it - he's a carp angler, at heart, and they don't stoop to weighing fish, unless they're mid-thirties!
I'd seen enough and recast my rods, the right hander going away almost immediately and I found myself attached to a spirited pike of little more than 9 lbs - but, at least, I had avoided the dreaded blank.
We fished on, a small pikelet to Rob and a lost fish for me, but that was it and all before 08.30 hrs. I stayed until 16.30 hrs because Bev had gone on a coach trip to Romford Market with her mate and wasn't due home till after 18.00 hrs - just in time for "Strictly" (it's the final don't you know?) The boys disappeared to go lure fishing at another venue and I spent the rest of the session alone - a cracking way to waste a day until the fog descended and made the drive back home an absolute nightmare. I've seen enough to know that I'll be going back there very soon - the Christmas holidays look favorite. 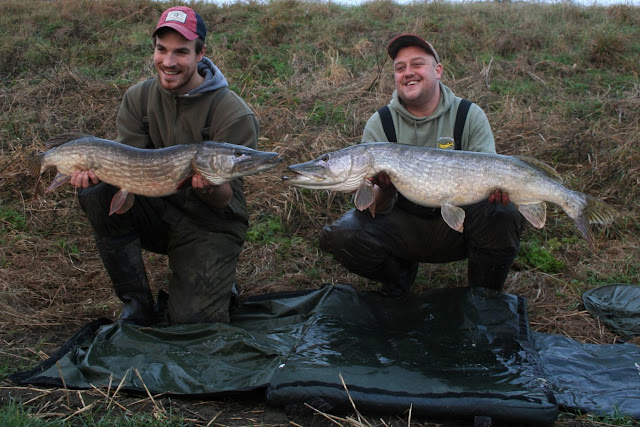