So there we were, all assembled on the banks of the drain, awaiting the alarms signalling the interest of a hungry pike. Sadly, they hadn't read the script and the fish had switched right off since the rapid fall in temperatures during the previous week. Neither Luke or myself, had a sniff, Benno saved the day with a bite, on a Bluey tail section, and this allowed Bryn a chance to realize a dream. With Benno at the net and Luke providing the coaching, Bryn successfully landed his first ever pike. He'd never seen a live (or dead) one until that moment; his beaming smile speaking volumes about how he felt. He had told his Uncle Ben that he felt cold, not another word after the fish was on the bank.
With advice from Luke and a practical demonstration from Ben, he was ready to pose with his prize, for the ritual photos. 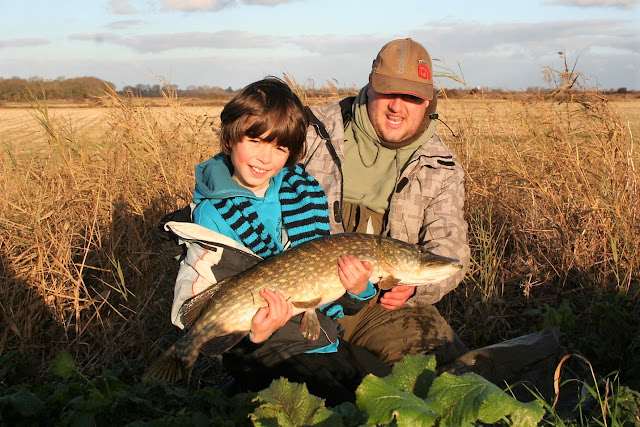 It was a cracking morning, despite of the lack of action to my rods. Birding very enjoyable; loads of Fieldfare and other thrushes had roosted overnight in the adjacent hawthorns, there was a female Merlin hunting the rough grassland beyond the drain, at first light. I recorded my first Mistle Thrush, for ages, three Little Egret, three Marsh Harriers (ad male, ad female and sub-ad male) Gadwall, Teal, Water Rail, Common Snipe, Kingfisher, Cetti's Warbler plus a decent northerly movement of Lapwing. I should make more of an effort to carry the big lens, but can't be arsed to lug that extra weight just in case I get a chance photo opportunity.  However, the day was not about birds or me, it belonged to an eight year old, just starting out on his personal exploration of the joys of angling. "Touch me, Perce!" (You've go to be a Wraftie to understand this?)
Posted by Dylan Wrathall at 14:31