The overnight conditions were clear with an easterly airflow, so I wasn't overly surprised by the paucity of the moth numbers in the trap. Typical autumn fare included my first Feathered Ranunculus and Lunar Underwings of the year - only one Silver Y! It was while I was checking the contents that I became aware of a number of Chiffchaffs along the gardens, and probably out in the maize, there was even one individual singing. I went indoors to grab the camera gear and got back outside just in time to see/hear a Common Snipe fly over the bungalow - nice.
We've still got good numbers of House Sparrows around; the garden feeding station is probably the main reason? I could hear Long-tailed Tits calling and a quick burst of "pishing" resulted in five of these superb birds appearing in the buddleias, plus a couple of attendant Chiffchaffs, result. I remained outside for an hour, or so, recording several small groups of Siskin headed north, Linnets and Greenfinches moving south and a Kestrel loitering. Jays (local breeding birds?) are very active/conspicuous as they fly to and fro between Ramsgate Cemetery/Broadstairs Cricket Ground and the mature trees around Newland's Farm - collecting acorns at a guess?

Yesterday morning, as I was sorting out the bacon rolls, there was a Lesser Whitethroat fannying about in the buddleias. I managed to grab a few shots through the double glazed kitchen door which, under the circumstances, I am rather pleased with. 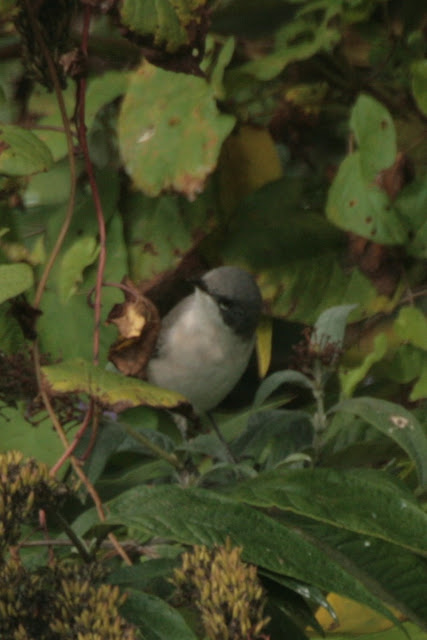 Clear blue skies, a boisterous easterly - so what am I doing this afternoon? Going back to Sandwich Coarse Fishery for a "Sundowner" session. I called in for a chat with Kevin, yesterday afternoon, and got a session booked. The munga is ready, chick peas prepared, rods, reels and assorted kit await loading into the car. Will this be the session when the "Bruce & Walker" challenge is realised?
If it comes to pass, you can bet that I'll be writing all about it tomorrow!
Posted by Dylan Wrathall at 12:17