When Barry Matlock took a wander across to Foreness Point, yesterday afternoon, he had an incling that something good might be on the cards. He, and Gloria, were in the right place, at the right time, to watch a Pallid Swift arrive in/off from the North Sea. He was able to get some very resonable record images, despite the camera being in a bag? (Mine hangs on my shoulder - whatever the weather) So the record should be a straight forward acceptance, yet it won't be! People who weren't there will have their say, the quality of the images will be called into doubt and the whole affair will rumble on for a while before, begrudgingly, the record gets the thumbs up because the KOS can't afford to lose another member. Birding politics - what's all that about? 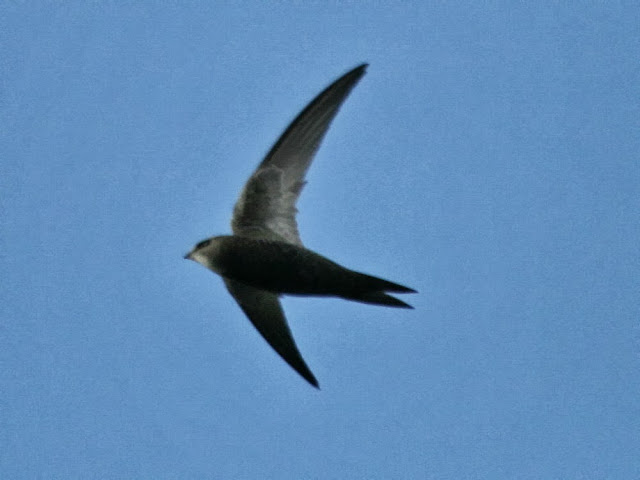 Steve Gale has recently had cause to post on the antics of birders using the social networks, as has Jonathan Lethbridge (The Wanstead Birder) in a less aggrivated form. Barry's images are good, but inconclusive if given the full grilling. It certainly looks like a Pallid Swift, the vast majority of the features are clearly visible in one, or several, of the shots. There is just something about the biird that doesn't quite fit the mould. Is it the wing tip shape, or the apparent lack of a pale throat? I don't know, or care that much. Barry has called it - so a Pallid Swift it is. He is a highly accomplished birder who has a hard-earned reputation of finding good birds around the Kent coastline. How many birders twitched his Eastern Black Redstart at Walpole Bay?
On 29th November 200?, I found a Pallid Swift on the Ash Levels (above the Ash Levels in reality) which was witnessed by Gadget. The record was dismissed, out of hand, by the hierachy of the KOS because I/we lacked any experience of autumn Pallid Swifts? Are you having a laugh - who in the UK does? So Bazza, I wish you every success with this sighting - if I was a betting man; I'd have a fiver on a Margate Cemetery "swift sp." in the next couple of days! (Know what I'm saying?)
Posted by Dylan Wrathall at 10:23