Benno and I had an early morning rendezvous in a car park beside the RMC where we had arranged to spend our first pike fishing session of the 2013/14 season. The swims are a mile and a half away, so the secret is to travel light. Our rods ready assembled, frozen baits in light weight cooler bags and our terminal tackle, alarms,cameras and assorted dross in small rucksacs. No need for bed chairs, umbrellas and/or bivvies. We can sit on an unhooking mat and if it rains we get wet, or go home! It really is that simple - pike fishing is our hobby, not our job or a ritual of endurance.
The weather forecast was horrendous; heavy rain driven on by a brisk SW wind - utter nonsense! We had blue skies and spent quite a while watching dragonflies hunting the canal margins, there were several pairs of Common Darters still egg laying! Kestrels hovered over the adjacent fields and I had glimpsed a Barn Owl, in the half light, as it drifted over the marshes en route to its' daytime roost.
I really am a very lucky man; my son is one of my best mates, Bev is my staunchest supporter, yet my biggest critic when I fall out of step, she underpins my being and ensures that my family connections remain as important as life itself. Getting old does this to you, so I am sure that this sentiment is not unique?
So where does pike fishing come into this rambling drivel? Well; as Benno and I were walking towards the canal, he told me that he had got me a present. It transpired that he'd been to the Dover tackle shop where we'd obtained our deadbaits for the Loch Awe trip. The owner had discovered a packet of VB doubles in a, long forgotten, box of assorted trebles that Benno was looking through. The outcome was that Benno had obtained the VB's for free! "My Dad would love those!" 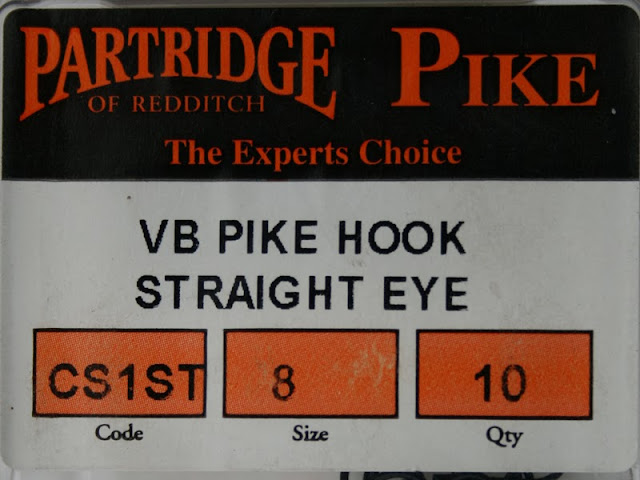 I used to buy my VB doubles from Fred Buller's gun shop in Amersham, Bucks. Manufactured by Partridge of Redditch, they were of a quality that few companies could match, at that time. When I returned to the sport, I was dissappointed to find that "doubles" were no longer readily available - I suppose a search of the internet would have yielded a result? However, my bother Simon, got hold of a supply of Peter Drennan "Specialist Doubles" and my need for VB's was reduced. 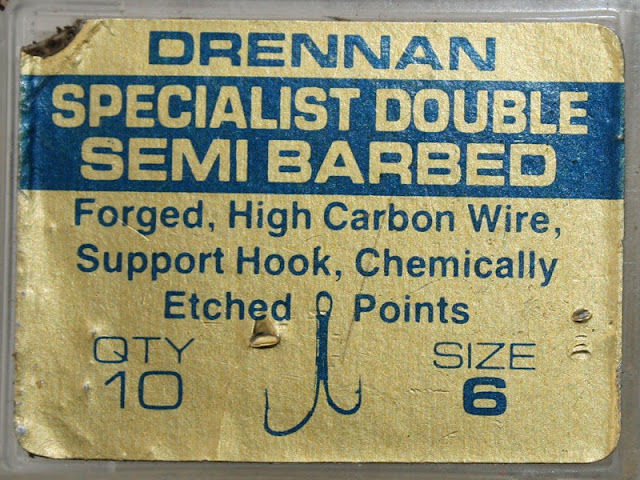 The Drennan hook is a well made and reliable pattern, superficially like the original VB design, but lacking in one key component - the offset angle of the twin hooks. I have no gripes with the Drennan hook, after all I have landed the vast majority of the pike I've taken since May 2011, on these. So is it nostalgia that drives me on? The pleasure of aquiring these hooks is completely disproportionate to their worth, both in monetary or technical terms - it is purely an indulgence on my part. These hooks being as powerful as certain "pop" music in the ability to recall times gone by. 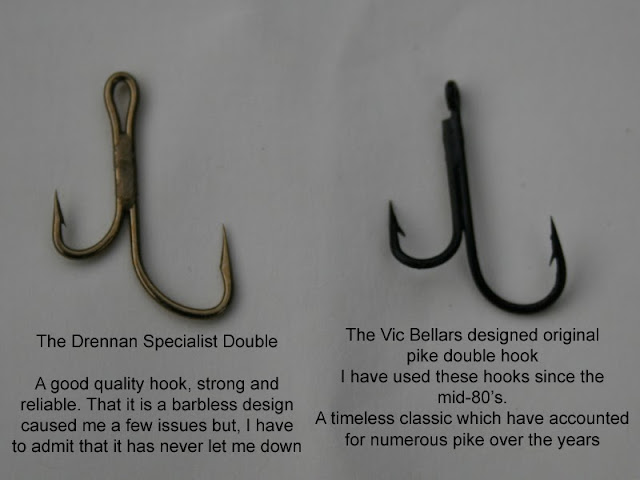 The other significant change that has been adopted, for the coming season, is that I'm now using the Matt Hayes "Limited Edition" centre pins with braided line, as opposed to my ABU Cardinal 66x's and mono. It should have no impact on my catch rate, but might just help increase the enjoyment of each capture? The Duncan Kay's and Optonics remain the same as always - short range fishing doesn't require ultra technology that is now readily available to those who seek such things. 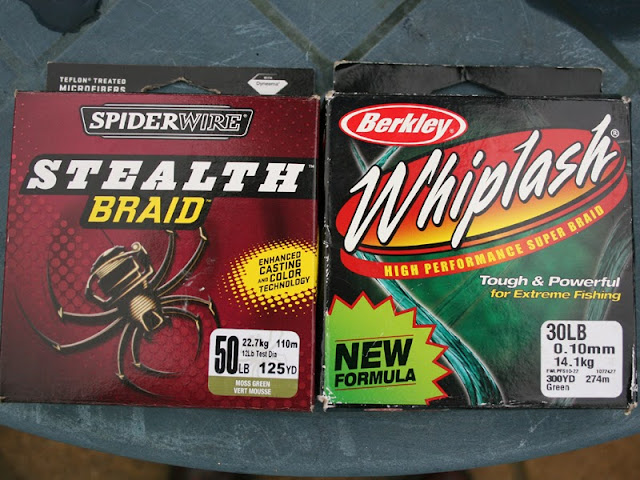