Over the past couple, or so, years the Dover Harbour complex has been the focus for a very active group of birders/photographers - their results being a dazzling array of images of what can be discovered in these most bustling environs. My mate (and soul blog follower) Mark Chidwick has a blog (The Harbour Master - I would post a direct link if I had the first clue about such things!) in which he recalls his adventures and sightings from the various points around this incredibly busy Channel port.

I make these references because I have also had reason to be appreciative of the facilities offered by the Royal Harbour at Ramsgate. An international ferry port and a commercial harbour, Ramsgate has so much to offer the birder who has time to look beyond the obvious. In 1993, when I first moved to Kent, Ramsgate Harbour was a location that was visited very rarely, however, when I relocated to Thanet, it took on a whole new dimension and my visits became very much a part of my weekly routine. 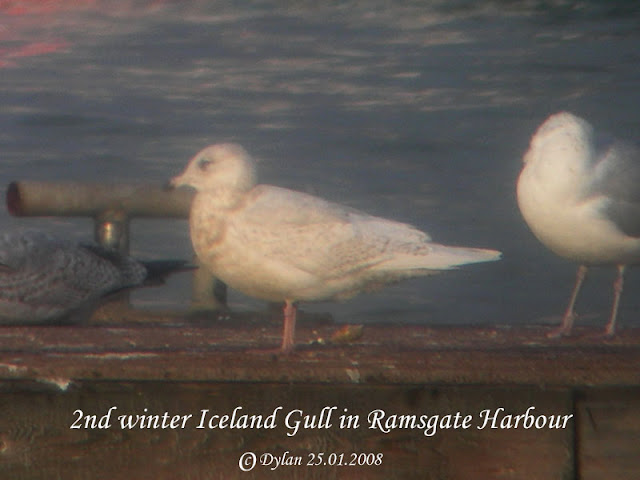 I make no claim to have made discoveries beyond the knowledge of current science, but I did regularly find myself amazed by the diversity of birdlife that could be found within the boundaries of this, most, industrial site. Could this pattern still continue? I am no longer able to offer an answer - I haven't visited the harbour in over a year! What I can say is that the fishing fleet and ferries still operate and the off-shore wind farms have added to the craft which ply their trade from this historic port. I do not have a "harbour list" - although I feel I probably should, but can recall many highlights from the start of the new decade. I think the first real star was a juvenile Great Northern Diver, which remained around the lifeboat station for much of the winter - my photos were digi-scoped using a 2-mega pixel Nikon CP 775.
Over the years I have had many opportunities to discover birds that were "out of range" - mostly of the gull family, but odd Shore Larks, Snow Buntings, Black Redstarts and waterfowl ensured that I kept a close eye on what was about. My fascination with gulls is as a direct consequence of my time spent in this place. The numbers and variety being a result of the activities of the remaining fishing boats and a bi-product of the geography (Thanet sticking out into the base of the North Sea!) I really feel that gulls are a group/family of birds that you either love or hate - there being no in between?
Because the birds are familiar with the comings and goings of the human visitors, they tend to be at ease with close approach - a fantastic opportunity for the naturalist/photographer.

From my own point of view, I have had so many enjoyable sessions around Ramsgate Harbour as for it to be impossible to define what it is that makes it so special. I studied the beak patterns of Cormorants, looked for colour-ringed gulls and had the chance to take the first photograph of an "L.a.ommissus" Herring Gull in Kent.
So please make an effort to search your Google "thingame-bob" to locate Mark's Harbour Master blog, but even more importantly, if you ever find yourselves at a loose end - check out the wildlife that shares the industrial sites where you are - I'm sure you'll be surprised by the diversity to be found.