The more I spend time looking, at moths, do I realise how much there remains to see and learn. Garden moth trapping has added so much more to my wildlife enjoyment than I'd foreseen at the start of the year. I thought that moths were going to be another piece in a much bigger picture. Certainly hadn't envisaged the impact that they would excerpt as the months passed by. Fear ye not, I'm still fishing, chasing those Barbel in The Stour, yet don't want to place too much info out in "Blogland" until the project has been completed. Therefore garden moths, it will be, until such time as I have something worth sharing on the angling front.

Jersey Tiger Moths have taken over the role that Elephant Hawk-moths held earlier in the year. Only one Elephant Hawk in August, yet Jersey Tigers are now being attracted in ever increasing numbers. Twelve last night and something I'd never considered possible for a Thanet garden? I'm sure that the patio planters filled with Nicotiana plants play a big part in this phenomenon. As dusk falls the heavy scent dominates our garden and, as such, surely attracts insects from far away due to the potent aroma of these wonderful flowers. Last night a huge, and very noisy, Hawk-moth sp. was attracted to these same flowers. I wasn't able to id the insect but, feel sure it would have been a Convolvulus Hawk-moth? An August Thorn was a nice surprise, as I turned the trap off on Saturday morning, only the second time I've recorded one in the garden. 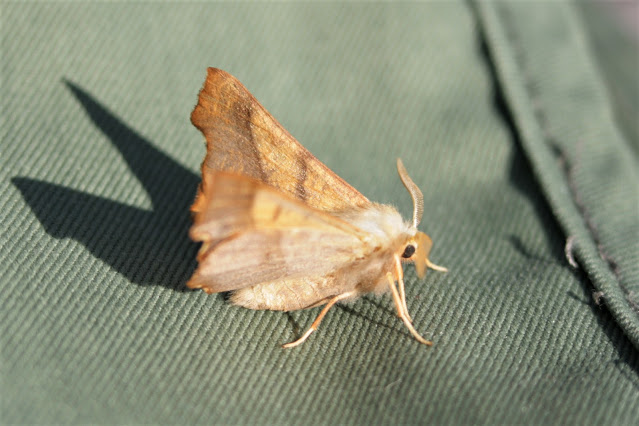 Plenty of other nice moths have been attracted to the 125w MV, and I'm really enjoying the id challenges they pose. However, I certainly ain't pushing barriers beyond the very ordinary. There have been some individuals which have cause me much head scratching, hence the "splinters" in the blog title. I've stared long, and hard, at the photos I've recorded and still can't get anywhere close to a positive id. If they were micros, I'd not be too bothered. That they are proper "macro moths" is an issue which causes me some angst. One is a Gothic, of one species or other, whilst the second has much to suggest it being a Cosmopolitan, yet because I'd not examined the underwing, will have to remain an un-id'd mystery.

So many other moths to enjoy, as this crazy period of hot, dry, weather continues. Migrants are still rather scarce, given the conditions, but Silver Y's, Pale Mottled Willows, Rush Veneers and Diamond Backs are fairly routine during any morning examination of the egg trays. Some more photos!

So there I was, happily planning my angling schedule for this coming week, when BOOM! A major fish kill at Fordwich Lake has shut the entire site and with it my access to the area of The Stour I'd been targeting. It would seem likely that an oxygen crash, due to an algal bloom has been responsible for this catastrophic event. The photos I've seen are heart breaking for all those C&DAA members who frequent the complex. If there's a positive, and it will be difficult to grasp for the majority of myopic Carp chasers, it's that there doesn't appear to be any Eels killed by this disaster. What this shows is that it was an oxygen depletion and not, in my opinion, a far more serious chemical pollution. Being old enough to remember the 1976 heatwave and the colossal fish kill that the Tring Reservoir complex suffered, as a result, I also am able to recall the subsequent rejuvenation of the fisheries. Those survivors had unlimited food supplies and, as a result, within four years we were fishing for Bream, Tench and Roach which were all capable of beating the records of that time. Will Fordwich be able to recover in the same manner? I've no idea, but can only hope for a positive outcome for all those club members involved with the venue.