If the weather doesn't change soon, the 2022 Kefalonia holiday might just prove to be a waste of effort in the sun-tanning department. Living here, on Thanet, and spending plenty of time outdoors ensures that, even in the depths of Winter, I still retain a hint of colour on my hands and face. At present the skin tone looks like I've just spent six weeks out in Barbados! Yes, I use sun cream (Factor 30 and above) and don't lay about like a devoted sun worshipper, but have to admit that getting a tan is part of the joy of being outdoors. I've seen, and listened to, much of the, very important, information that Danny Fairbrass & Korda have to say about the situation in regard to skin cancers. Hence the use of sun cream and wearing that ridiculous hat. Yet, having done it all my life, not much is going to change the way I behave, regardless of how valid the viewpoint? I'm a grown adult (apparently) and have reached this far into my journey doing things my way. If it were to end tomorrow? Not a single regret about anything which is remotely important and that's exactly how I see the road forward.

It was only the brisk NE breeze which ensured that I was able to remain out in the garden for the majority of the day. I don't own any equipment to measure the temperature in our garden but, there is a BBC weather station at Manston, am able to see what they are recording little over a mile away to the S/SW. 27C today and predicted to get even hotter before a peak of around 34C on Saturday? Rain by next Wednesday - yeah I believe you!

I'd done the moth trap, nothing particularly exciting to report, and was standing with my second coffee of the morning when I spotted a Hummingbird Hawk-moth nectaring on a neighbours Buddleia. I then spent a very disappointing couple of hours looking at a blank sky. A handful of Lesser Black-backed Gulls, apart, absolutely nothing to report until 12.50 hrs when I spotted three Common Swifts. My first in over a week. Over the next hour, or so, I recorded sixty-seven birds headed in a N/NE direction. I'm not able to discount the possibility of duplicate sightings as they frequently showed to the East and were lost from view beyond the bungalow roof-tops. Whatever the real total, the largest group was thirteen birds, it was certainly a notable movement given the date. 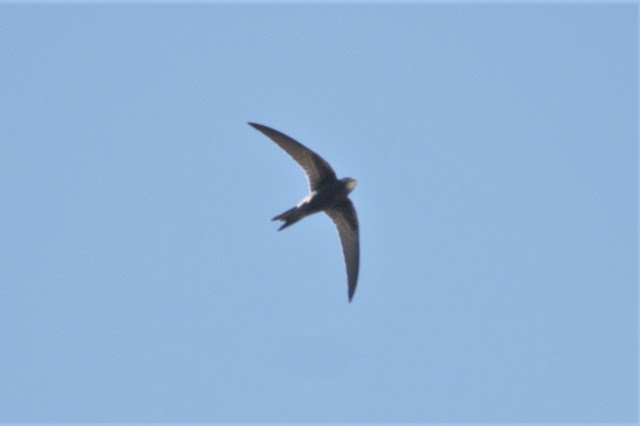 Bev and I went across to visit the grand-kids, mid afternoon, so it wasn't until 17.00 hrs that I was alerted to the only Common Buzzard of the day by the whinging cries of the local Herring Gulls. Just at the start of Autumn raptor migration, these early sightings are most likely to involve the local breeding population dispersal as opposed to real movement. It won't be long, however, before the flood gates open and the gulls have good reason to protest? 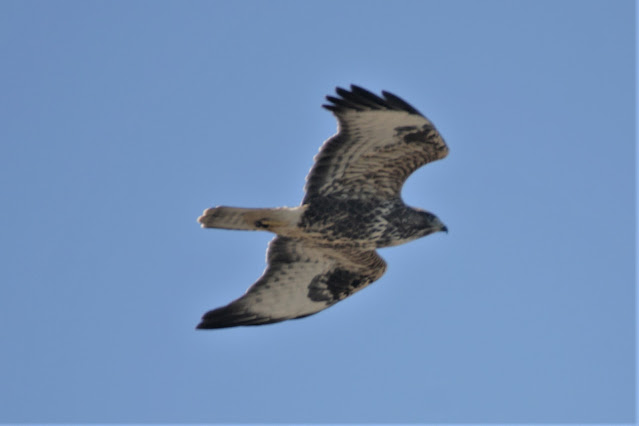