I doubt many visitors will be surprised to learn that my first Pike fishing session of the new 2021/22 season was a total blank? I spent much of my time, beside the Royal Military Canal. hunkered down beneath my "Groundhog" shelter attempting to keep out of the driving rain. It wasn't without incident, however, as little after 05.30hrs I was pushing my barrow towards my chosen section when I picked up a pair of shining eyes, in the beam of my headtorch, coming straight towards me. It was a surreal encounter, as a young Badger came to within 2m of my barrow before realising something wasn't as it should be. Absolutely no panic, the animal just shuffled down the bank and proceeded to swim across the canal, illuminated by my headtorch. This is the best encounter with this species I've experienced since moving to Kent in 1993.

With time now, very much, on my side it is nice to be able to avoid weekend fishing trips knowing that Monday to Friday will allow so much more freedom. Thus it was silly o'clock this morning that I left home for the second session. Fuel being a rather precious commodity at present, I opted for the short drive across to the flatlands, as I'm attending the first Canterbury/Thanet Regional PAC meeting this evening and needed to ensure I had enough diesel in the van for that trip as well. Three baits in the drain before 06.35 hrs, my middle rod registered a bite with twenty minutes and a very spirited battle resulted in a fiesty "Jack" of around six and a half pounds visiting the unhooking mat. I remained at the venue until 10.30 hrs, not another bleep on the alarms - hey ho! 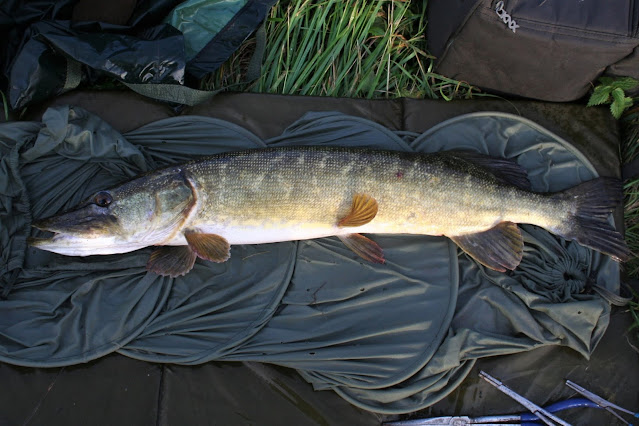 The weather was all over the place, with heavy showers, blustery spells and some brilliant sunshine. Wouldn't be England if we couldn't moan about the weather? Obviously pleased to get the first Pike of the new campaign, it was a bird that sealed the deal. A juvenile Spoonbill put in an appearance on a pool behind my swim, before flying off high, to the South only to return a few minutes later and continue North. The first Spoonbill I've found whilst sat behind the rods - brilliant stuff.