I'll settle for that

Back out on the flatlands, early doors, for another Pike session. It couldn't have started any better, as I'd only just cast my second rod, 06.25 hrs, and was putting the third one together when the alarm sounded and the indicator rose, steadily, up the needle before falling free allowing the line to peel off the open spool. A very angry Pike, of around five pounds, soon in the landing net. The bait couldn't have been in the water longer than a couple of minutes! Brilliant, I had avoided a blank and sunrise was still forty minutes away - crazy.

I got sorted out, the fish unhooked and returned to the drain, before getting all three rods back in the game. Dawn was a rather non-descript event, this morning. The sky just got brighter without any of the orange/red glow which is usually such a feature out on the East Kent Marshes. By 08.10 hrs, nothing else to report so I re-positioned my three baits, giving them another dose of fish oil & Predator Plus just to enhance the attractiveness. It had been quite a good morning, bird wise, as I'd watched a Great White Egret fly in low, from the east, dropping down onto the pool where I'd seen the Spoonbill, last week. This was at 07.40 hrs, at 07.50 hrs another three joined in the spectacle, arriving high, from the north. Four Great White Egrets, it was like being on Kefalonia, I've never seen this number together in the UK previously. Jays were also a feature of this period, moving steadily inland having arrived in/off the sea. Yeah, it was pretty good out there today. Then, to put the cherry on the cake, at 08.55 hrs, the same rod as before was away and this time I found myself attached to something far more determined. A magnificent tussle ensued before I was able to coax my prize over the draw chord. 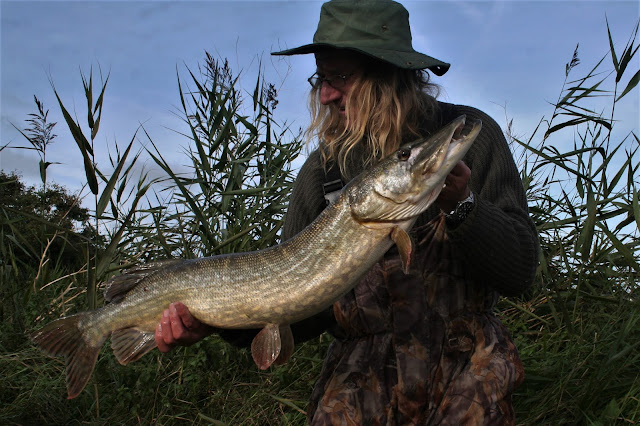 Knowing it was a good double meant that my Winter Pike campaign had actually got started. I placed it in an ET Pike Tube, just to allow it time to recover, and continued to fish on  for another hour, or so, before packing the kit away and going through the ritual weighing and self-take photography caper. 14 lbs 12 oz is a cracking way to set the ball rolling. Back out tomorrow, down on the RMC for an extended session. Let's hope I can continue in similar fashion?
Posted by Dylan Wrathall at 17:46