Going back out onto the flatlands, early this morning, proved to be a good decision. I ended my short, 06.40 - 10.00 hrs, session with three Pike to show for my efforts. That it represented a fish to each rod was rather pleasing as it confirms that my bait choices and presentation are working. It was a slow start, in the pre-dawn glow, as two Eel bites were registered but resulted in neither culprit being hooked.

It was almost 08.00 hrs before the show got started. My "back biter" alarm signalled a take on the middle rod and I was quickly on the scene. The fish gave a great account of itself, even taking out the next door rod in the process, before I scooped up a lovely Pike which was clearly a decent double. Leaving the fish to rest in the net, whilst I sorted out the other rod, I was in the process of getting the unhooking mat, and the weighing sling, wet when the rod, that I'd recast not two minutes previously, was away. If ever I question why I carry two landing nets, this situation is exactly why. Quickly into the second battle of the morning, a lovely Pike of 7 lbs 5 oz was coaxed over the net chord and dealt with, thus allowing me to get the first one out of the net and into a retainer. 14 lbs 9 oz being the weight registered on the scales. With those two rods back in action, I re-positioned the bait on my other rod, whilst also giving the offering another booster shot of fish oil and Predator Plus. It was just after 09.00 hrs, whilst chatting to my brother Sye, on the phone, that this final bait was to prove it's worth. Only a small "jack", of 5 lbs 8 oz, but three fish in a session for the first time this season. So I was happy with the result. 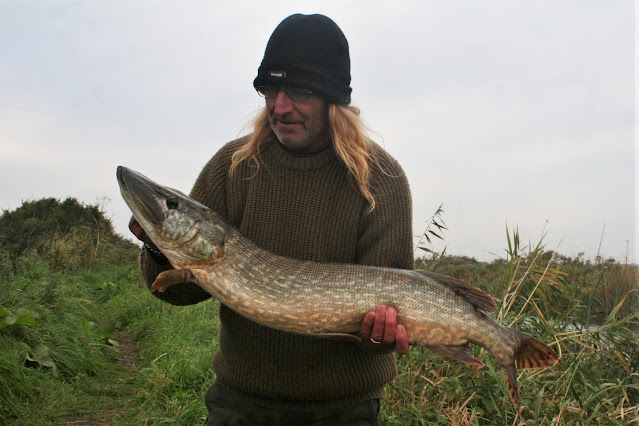 Only when getting back home and having time to study the images of my latest "double" did I realise that it was the same fish as I'd landed last Monday, some half a mile away from today's capture. I can only conclude that - one, these fish are extremely mobile, and two, there are not too many present in the drain. I've said, many times in the past, that it is not possible to put a label on a bait, thus any capture is a result. Repeat captures, however, are not part of my plans, thus it is time to look elsewhere I feel?