I got down to the RMC, really early this morning because, if the water was still high and heavily coloured, I would have time to revert to "Plan B" before the sun rose. Fortunately, as it turned out, my chosen section was in fine fettle and I was able to get my baits presented well before dawn broke. I had six hours free to me and planned to leapfrog the rods back towards the car park at hourly intervals. By using this technique, I feel more confident of discovering feeding Pike opportunities rather than simply waiting for a feeding spell to occur. Before 08.00 hrs I had experience two occurences on a Dyson rig presentation, neither of which resulted in hooked fish. I suspected Eels to be the culprits?

I went through the leapfrogging manoeuvres several times during the course of the morning. Absolutely nothing happening despite me having covered the best part of quarter of a mile by this point. The 11.00 hrs repositioning was the final throw of the dice. I'd already agreed with Bev that 12.30 hrs was the end of my session. At 11.35 hrs the "back biter" alarm sounded as another Dyson rig presented bait had been taken. Grabbing the landing net I got to the rod. Nothing was happening, no line peeling from the reel or even twitching on the canal surface. I picked up the rod, off the rests, cursing those bloody eels! I gently felt the line, there was something happening. I closed the bale arm, did a couple of turns of the reel handle, before sweeping the rod back over my shoulder. All of a sudden it's game on! The fish made two powerful surges, the clutch screaming in protest, then simply gave up. It was all over within a couple of minutes, max!

As I drew it into the landing net, I could see that it was a decent Pike. Once on the bank it looked very big indeed. A massive head, yet a rather slim body shape, suggested that it had potential to be much heavier than the 16 lbs 14 oz that the scales registered today. My second double in two days, what's to moan about? 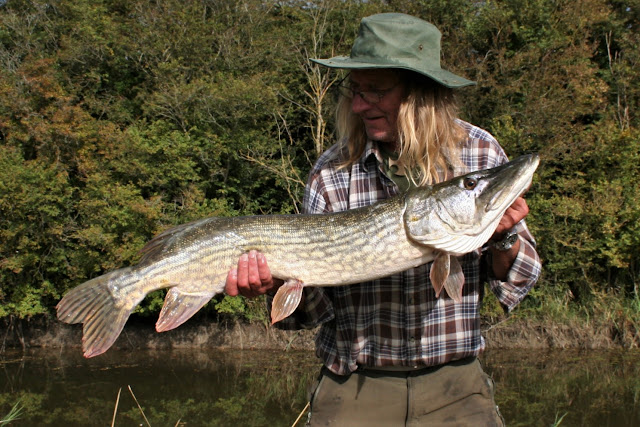