Obviously, it's not for everyone, but I derive enormous pleasure from the simple activity of watching the wildlife that I encounter on my Newlands Farm patch. Status, rarity or common, means nothing under these circumstances and huge thrills can be derived from seemingly ordinary sightings. That our bungalow is situated on the edge of the farm, means I am able to treat it as a micro patch, within the bigger picture. We're now in our nineteenth year of residing here and still very ordinary creatures are able to provide me with a great sense of joy.
The Bank Holiday weekend has been absolutely roasting, here on Thanet, everyone, locals and visitors alike, have made the most of the conditions with plenty of tanned torsos and smiling faces on show as I wander around. However, all good things ......... it's back to reality today; work at 14.00 hrs. It was just after 08.00 hrs and I must have been on coffee number two, standing at the study door, when a flash of fiery orange-tail grabbed my attention, as a bird alighted in the garden hedge. Bloody hell, a Common Redstart, our third garden record and the first since 2008. Gone just as suddenly as it appeared, I was left with a vivid vision of joy. Garden birding doesn't get much better, unless you manage to get a photo, I guess?
So with nothing better to do, whilst awaiting a return to the daily grind, I was out in the garden for much of the morning, camera and binoculars to hand. The feeding station continues to be central to my garden observations, with a Rose-ringed Parakeet now starting to visit periodically. With this in mind, I was holding the camera when a movement caused me to look over the fence and watch a Grey Squirrel running along my neighbours fence! A garden mammal tick! How can that be so exciting - it's only a squirrel, yet the first one in our garden. I didn't actually see it in our hedge, but managed to capture a record shot as it continued along the fence line of my other neighbour. Quality! 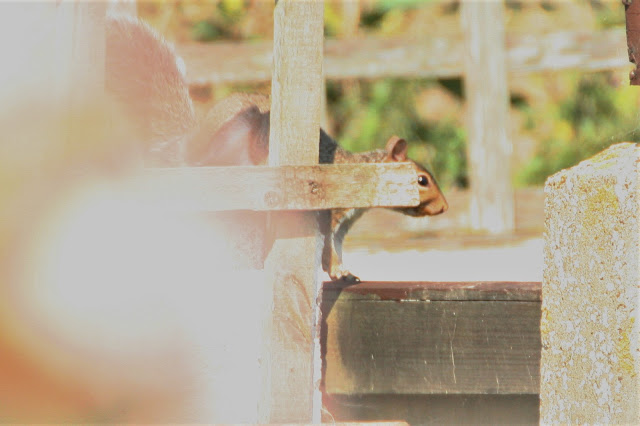 By now I'm absolutely buzzing, after all it's days like these that make patch watching so rewarding. At 10.30 hrs four Common Buzzards pass eastwards overhead, with two more, south, a little later. One of the juvvy Kestrels then flies over the garden before hunting over the fallow area where I'd photographed the Whinchat, and a Sparrowhawk spiraled up over the farm paddocks. A Jay alighted in the conifers of a garden two doors down whilst Goldfinch and Linnet called as they pass overhead. Garden birding at it's very best. As I've already stated, birds don't need to be rare to be exciting at this level of involvement.


No surprises that I went to work, very smug with myself, life is good!