It was just after 06.00 hrs that I drove off, into the darkness, headed for a small drain out on The Ash Levels. I've taken a few pike from the venue, in the past, and felt that it would be a good bet for a bite, or two, although the fish were unlikely to be big.
The dawn was a drab affair, cloudy skies masking the rising sun and a there was a boisterous wind blasting across the marsh, although it remains very mild: 13C! As the light intensified, a few Fieldfares left their roost, noisily passing overhead towards the distant orchards. I got three rods out before 07.20 hrs and sat back to watch the dawn. Within the hour, I had a couple of bleeps from the middle rod (red dyed trout) and a short lift on the monkey - bloody eels! Twenty minutes later and my left hand rod was away - 1/2 mackerel, dyed yellow, was picked up by a pike and, after a spirited battle, found itself engulfed within the folds of my 30" barbel net. A nice plump little fish which registered 10 lbs 4 oz on the Avons - result! I've got hold of a tiny tri-pod, on which I used my camera to obtain a series of record shots. 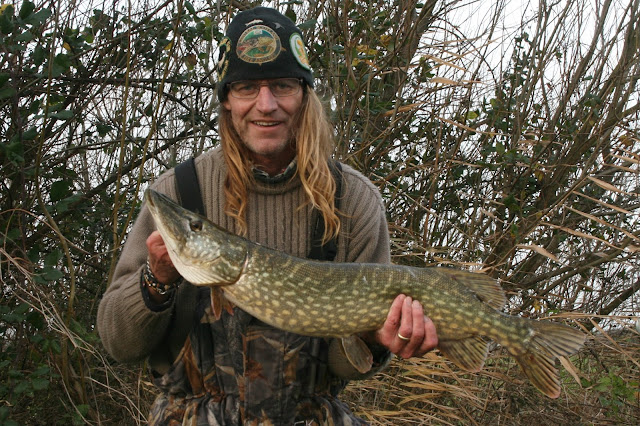 The rest of the session saw a "jack attack", on the mackerel again, but it was very quiet and I watched a distant Short-eared Owl battling against the wind. Why an owl would attempt to hunt under these conditions is a mystery - although hunger might play a part, these winds have been blowing for a prolonged period and owls will have struggled to find food recently. A  few distant Greylags and a soaring Common Buzzard were about the best of the rest. Nice to be outside and very happy with the fish.
Posted by Dylan Wrathall at 14:58