It was a beautifully calm evening, yesterday, and I sat in my study; door wide open, as the sun dipped below the western horizon awaiting the bats and hedgehogs to come out to play. Three very brief cameos by Common Pipistrelles was enough to demonstrate that very specialist techniques will be required if I'm ever to get a flight image of these creatures in the half-light of dusk. Hedgehogs were quickly on the scene, as soon as it was truly dark and it was very interesting to note that several visitors were only wanting a drink and left without touching the food. Between 20.20 hrs and 23.30 hrs there were at least ten visits to the feeding station by hedgehogs, quite how many individuals were involved is a little tricky to ascertain but my best guess is that at least six animals were attracted during this period. 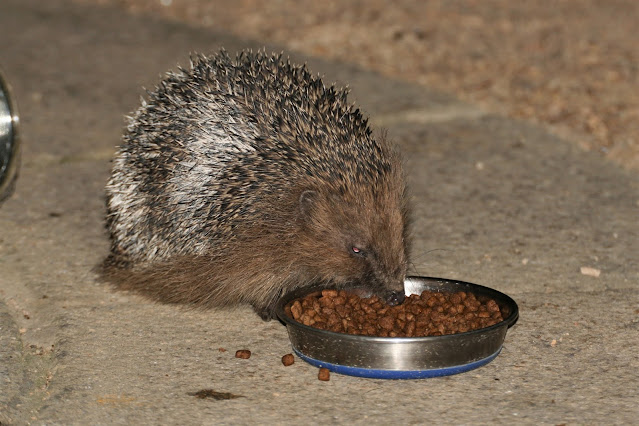 The feeding station is set up around ten feet from my study doorway and by using the tripod mounted camera kit I have started to amass a collection of images which will hopefully provide me with a reference library of the garden visitors. At around 22.30 hrs a very large hedgehog rocked up, straight into the biscuits with all the noisy gusto of a hungry hog! Immediately I'm drawn to the strange white markings on its' rear flanks. Is it a partial albino? It was quickly joined by a smaller, much darker, animal and the pair munched away merrily as I fired off a series of shots. It was early this morning when looking back at the results of last nights efforts that I became drawn to the white markings again. A search of the internet, via the Hedgehog Street forum pages, was to reveal that my garden hedgehog is most likely a subject of a, potentially illegal, colour marking program. It would seem highly unlikely that a hedgehog could rub itself up against a newly painted fence/wall and produce such a pattern on its' spines.

Unlike the, BTO endorsed, colour ringing schemes that exist for our feathered friends, there doesn't appear to be any coordinated/regulated system in place where hedgehogs are involved. Thus, I have to deduce that it's a free for all and no useful data is created as a result of such activity. So as I said in my title - WHY?