I'll settle for that!

Thanet has been getting battered by a howling NW gale for 24 hrs and, if correct, the forecast suggests another twelve to go before any signs of it abating. The garden looks like a bomb's gone off. Plants smashed, furniture strewn around the patio and Bev's swing seat on its' back. Not too much point in attempting to dodge the rain to tidy up whilst these severe conditions remain. So, I was sitting at the desk, in my study, casually watching the sparrows around the feeding station when a Sparrowhawk came marauding over the fence and crashed into the thick vegetation at the bottom of our garden. All over in a flash, the hawk failed to grab a meal and dropped down onto one of the cast iron chairs that, luckily, was still upright. I grabbed the camera and rattled of a few shots through the rain smattered double glazing. As the bird was perched with its' back towards me I wondered if I might be able to open the study door and get some better images. Nothing ventured, as they say - I'll settle for these. 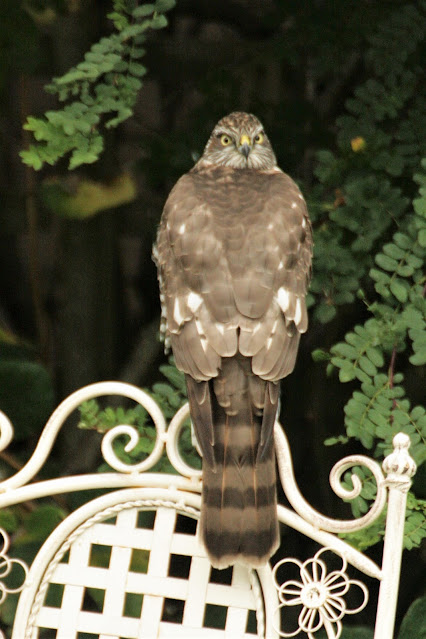 As I started to slowly open the back door the bird was obviously aware something was happening and, as I raised the camera, swivelled its head through 180 degrees to look in my direction. I thought it was only owls that could perform such manoeuvres? I continued to click away for another couple of minutes before the hawk decided that it was bored and flew off back from whence it came. I got some nice images, having to resort to ISO 1600 1/500th sec exposure. As is always the case, one stands out from the crowd. 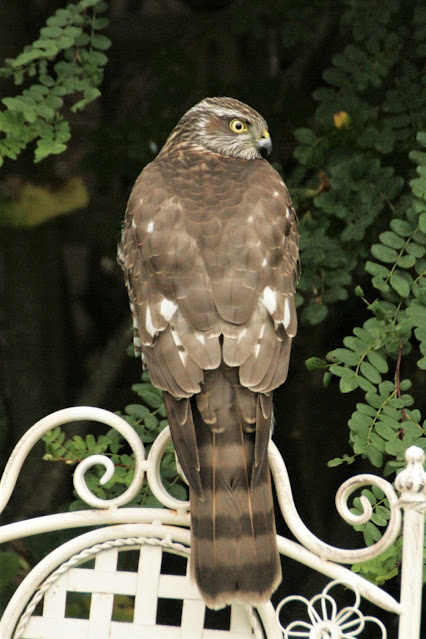