You'd have thought I'd be over it by now but, no, I didn't sleep well because my mind was racing about the prospects of casting a line into my new syndicate fishery. Out of the bungalow before 05.45 hrs, I'd topped up the van at St. Lawrence, en route, yet was still at the waterside before 06.10 hrs. I did a quick lap of the chosen pool before settling for a swim on the west bank. My very first session and all I wanted was to register a bite; not too much to ask?

The dawn produced a spectacular display of colour before the clouds rolled in and grey skies dominated the remainder of my session. I had chosen to use a couple of split cane Mk IV's complete with Mitchell 300's just because I can. It was little after 08.30 hrs when my left hander registered a take as a fish took a fancy to a popped up Bluey section. The Mk IV Avon was never likely to be tested by the culprit, a rather skinny jack of four or five pounds? In absolutely superb condition, I took the obligatory mat shot as befits the first fish from a new venue - job done! 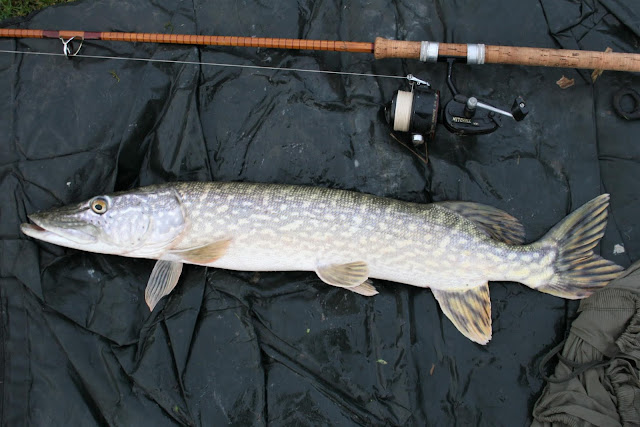 I remained, optimistically, sat behind the rods until 11.00 hrs when I decided to call it a day. No further action forthcoming, it was left to the local birdlife to keep me entertained. Two Ravens, a Sparrowhawk, my first Chiffchaff of the year plus so much more. It was a joy to spend time at the venue and I saw enough to know that I'll be back very shortly.