This particular project is purely a whimsicle folly, borne of frustration and the knowledge that garden birds will play a major part in my enjoyment of the natural world whilst Bev's mum remains in our care. Indeed, the moth trap may also feature more regularly as the year progresses, such is my need to make the most of whatever is on offer under these trying circumstances.
To photograph fifty species of birds, in any calendar year, isn't much of an ask. Indeed, I'm confident that I've managed that total ever since I was made aware of digi-scoping way back in 2003. My travels involved in pursuit of my angling targets, plus our  holiday adventures, ensure that I have every opportunity to point a lens in the direction of many species of bird during any twelve month period. To do so from within the boundaries of our bungalow/garden, however, does add a degree of difficulty to the task. I stopped keeping detailed lists some ten years back but, know that the garden list stood at 173 species and my Newlands Farm patch list 219 for the same period (November 2000 - May 2011) Funny how things that once seemed so important can become very secondary with the passing of time? Doesn't change the pleasure derived from any wildlife encounters, just the need to tick boxes and create data has long since passed me by - my choice and my life, so no need for others to get upset. 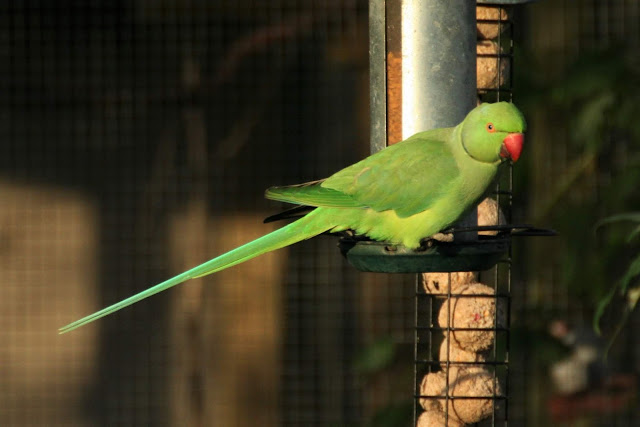 I would guess that I record between 90 - 100 species annually from the garden, so photographing fifty isn't such a task? That's how I saw it until I started to tot up my options. Oystercatcher, Curlew, Whimbrel and Green Sandpiper are annual, but have never been photographed because they are, almost exclusively, nocturnal records. Meadow Pipit, Grey and Pied Wagtails are also recorded every year, yet I've only one photo of a Pied Wag in the garden from the nineteen years we've lived here and that was in the snow! Green Woodpeckers breed over on the farm, and in Ramsgate Cemetery, yet again, only one photo from the garden. Basically, I'm going to require a fair slice of luck if this challenge has any chance of being completed.

The feeding station is providing me with plenty of opportunities to grab a photo or two and, in the run up to the RSPB Garden Birdwatch weekend, I've started to feed mealworms and a wild bird seed mix in addition to our regular fat balls and sunflower hearts. This is all very positive and will certainly allow me the best chance to get off to a reasonable start. Twenty five species shouldn't be beyond the realms of possibility by the end of March? Some "gimme" species being seen every day around the garden. House Sparrow, Blue & Great Tit, Starling, Dunnock, Robin, Woodpigeon, Carrion Crow, Jackdaw and Magpie are just awaiting the lens being pointed in their direction. I think that the key to a successful outcome will be the ability to make the most in any situation, thus keep the camera kit close to hand whenever I'm sat in my study and remain alert to the sounds and activity in the immediate vicinity. The local gulls are a superb early warning system for the approach of any large species, particularly raptors. In all honesty it won't matter how this idea pans out. I devised it as a project to ensure I keep my focus on the birdlife around the immediate area rather than worrying about those species which are off limits - so to speak. By insisting that I get an image, for the record to be included, just helps me work that little bit harder and keep me on my toes! It will be that extra effort required to record the likes of a flyover Red Kite or Cormorant which will make or break this project. Three more additions today, the Grey Heron being very much the type of record that I will need if I'm to achieve my target?