Completely out of the blue

Work is off the scale within the digital manufacturing facility at Fuji. Eleven hour shifts are great for the bank balance, in the run up to Christmas, but do impact, in a very negative fashion, on any plans for angling during the week. Still, can't have it both ways; working overtime is a personal choice not a mandatory stipulation and I'm happy to accept every extra penny that's offered. In two years, five weeks, I'll be retired and, as such, these decisions will no longer be an option but, until then, I'll be saying yes whenever asked. 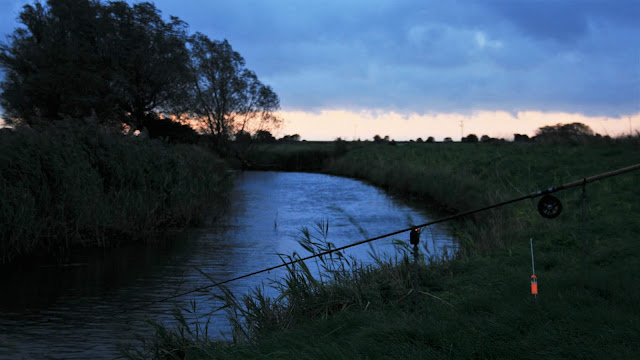 So where's this going? Well, I've managed a couple of early morning sessions, over the weekend, in search of pike and both were successful. Saturday saw me enduring battering winds and squally showers, whilst attempting to position my baits amongst the remnants of underwater cabbage patches in a very narrow drain. Two fish, both small jacks, fell to these tactics ensuring I returned home very happy, if somewhat windswept! By contrast, this morning I was back on more familiar territory, at one of my favourite venues, out on the marsh, resulting in the first double (12 lbs 3 oz) of the season falling to my popped-up smelt.

This particular drain network is situated on the "patch" of my mate, Neil, a local birder, and we regularly cross paths whilst I'm fishing out there. As there's always something to see, whilst I'm awaiting the bite alarms to signal a take, Neil is keen to hear about what I've seen. So it was this morning, best I could offer was a Merlin, a calling Greenshank, a dawn flurry of Fieldfares which were my first of the autumn and a few groups of Swallows moving south along the drain. We said our good-byes and off he wandered to complete his regular circuit. Less than ten minutes later, as I was going through the self-take routine, another birder came walking along the drain.
A long story, but after the ritual introductions, the newcomer said "You don't recognise me, do you?"
The penny dropped and there he was, Andy Johnson, him of Sandy Point Semi-P Plover and Elegant Tern fame, once again out on the East Kent marshes as he had been whilst serving as a warden at Sandwich Bay Obs all those years ago. We had a fantastic chat, attempting to catch up on what's been happening in our own little worlds, and reminiscing about the good old days. After all it was Andy who was responsible for Benno and I running a moth trap when we lived in Ash, way back in the summer of 1994. Sadly our time was up all too soon, and we parted company wishing each other all the best. A brilliant surprise and putting the cherry on the top of what had already been a very enjoyable weekend. Another fifty-four hour week to look forward to, inside the factory - it'll be a walk in the park! What will next weekend produce?